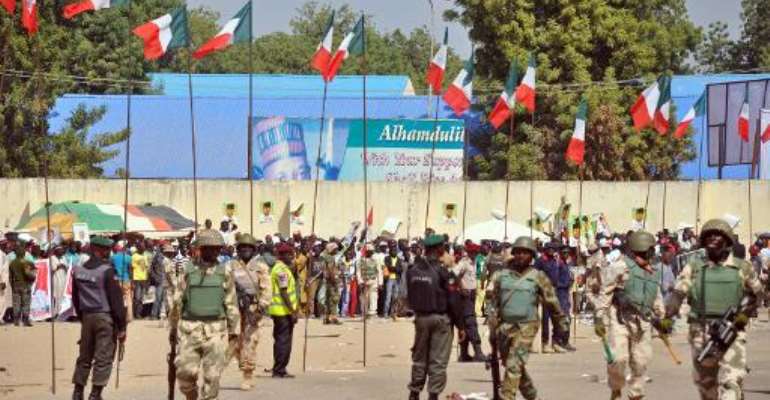 Soldiers and policemen deploy to secure the venue during a rally of the ruling People's Democratic Party (PDP) in Maiduguri, northeast Nigeria on January 24, 2015. By Tunji Omirin (AFP)

Maiduguri (Nigeria) (AFP) - Boko Haram Islamists on Sunday captured the northeastern town of Monguno, including a military base, after a fierce battle with Nigerian troops, security sources told AFP.

"We fought them all night long but they took over the town, including the military barracks there," he said.

Another security source confirmed that the Islamist militants had taken over the town, which lies some 137 kilometres (85 miles) from the Borno State capital, Maiduguri.

"It is true our troops lost Monguno to Boko Haram. They have taken over the town and the military barracks.

"Our troops had to withdraw after fighting the terrorists for several hours. They came in full force and at the end overpowered our men", he said.

He said troops were making efforts to reclaim the town and the barracks.

"Our fear now is that families of some of our men are trapped in the barracks and of course, the locals, including men and women and children need to be rescued," he said.

"We also have fighting equipment there and it will be dangerous to leave them at the mercy of the terrorists," he said.

Hundreds of Boko Haram militants had staged a pre-dawn strike on Monguno, causing terrified locals to flee as soldiers massed.

Analysts said the insurgents might be targeting the town in their push towards south.

However, others have suggested recently that they might be seeking as much weaponry as possible fearing a possible regional counter-insurgency operation.

Defence spokesman Chris Olukolade confirmed the seizure of Monguna, but said calm had returned to Maiduguri and Konduga -- two other cities -- also attacked by Boko Haram gunmen on Sunday.

"Meanwhile, an exclusive coordinated air campaign has taken over from ground forces in Monguno, as troops had to retreat from the location after the Brigade Commander and some of the troops were wounded while repelling terrorists attack on the town today, " he said.

He said government troops successfully repelled the attack on Maiduguri with scores of Boko Haram dead and many captured with wounds.

Olukolade said the military however lost some men while repelling the Islamist attacks in nearby town of Konduga.

He said the 24-hour curfew imposed on Maiduguri following the fighting would soon be lifted.

"Citizens will be allowed to go about their lawful activities from 6 am tomorrow, Monday," he said.

Boko Haram extremists have seized dozens of towns in their bloody six-year insurgency to impose Sharia in the country's mainly-Muslim north.