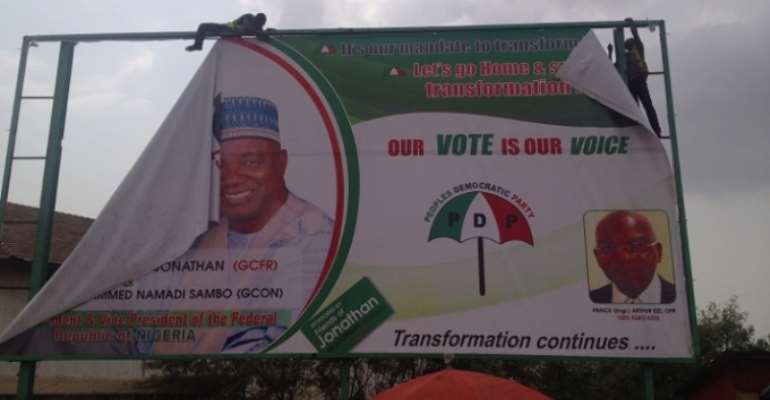 The Accra Metropolitan Assembly (AMA) has removed Nigerian national election campaign billboards after they popped up in some parts of the capital, Accra.

Billboards campaigning for Goodluck Jonathan to be elected president in Nigeria have popped up in Ghana.

The billboards located at Danquah Circle and on the Accra-Tema Motorway, were erected by a group calling itself Friends of Jonathan in Diaspora calling on Nigerians living in Ghana to go home and support the Nigerian President.

t could be presumed that the growing Nigerian population in Ghana is one group they cannot ignore. - See more at: http://www.myjoyonline.com/news/2015/January-20th/nigeria-presidential-election-billboards-pops-up-in-ghana.php#sthash.VJ9aVfRb.dpuf

Speaking to the media during the removal of one such campaign posters near the Accra Mall, the leader of the task force, George Baba Barikon, said they were acting on the orders of National Security through the direction of the AMA.

When asked if this would not compromise diplomatic relationship between the two countries, Mr Baba said he did not know why the National Security asked the AMA to remove it and added that all queries should be directed to National Security.

Africa's most populous nation will hold general elections on February 14, 2015.

With about 2 million Nigerians reportedly living in the country, Ghana appears to have become an attractive battleground for votes.