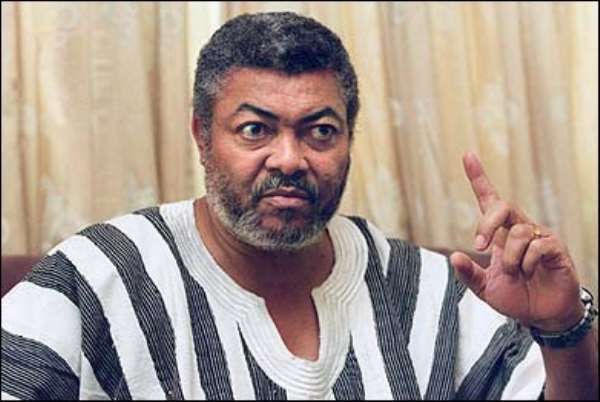 According to the former President, the late chairman was lured to a drinking spot by people believed to be NPP activists to have some drinks in the night, but in the following day, the man was found dead.

Speaking in his usual “broken” Twi language at a durbar organized in his honour at Dadiesoba Flt. Lt. Rawlings said, “ A very dynamic young man was killed because of his popularity and the way he had built the NDC in the area.”

He continued that the funeral was attended by some chiefs and some members of NPP and the DCE for the area, adding that at the time the DCE and his entourage was greeting the mourners, one of them whispered into his ears that NDC and NPP are all the same.

He told the teeming crowd that when he was invited to address the gathering, he made it clear to the NPP “guys” that if the NPP and NDC are the same, then they should go to the Koforidua, Takoradi and Nsawam prisons to exchange their sleeping places with Dr. Yankey, Ibrahim Adam and Mr. Kwame Peprah.

The former President indicated that on political lines they could be the same, but when it comes to reality NDC and NPP could never be the same.

He lamented that the Kufuor administration is using the excuse of “no more coups in the country” to loot the state coffers at the expense of the ordinary Ghanaian.

He said the NPP accused the NDC government of stealing trillions of cedis, but this was a lie, as most of his ministers are living in poverty.

Flt. Lt. Rawlings said within almost four years, most of the NPP ministers have put up mansions both here and abroad and have opened foreign accounts.

He accused President Kufuor and his ministers of using state funds to enrich themselves and building their party, instead of using the money to develop the nation.

According to him, when the horn blows for NPP to pack out of office, Ghanaians would see whether it was NDC officials or NPP ministers “who are thieves.”

The ex- President taunted that because of the bad deeds indulged in by the NPP they would not like to leave the office and therefore have employed foul means to win the 2004 general election.

He said NPP government is accusing him, Kojo Tsikata and his wife, Nana Konadu, of master minding the murder of the three judges and the Army officer, but they have forgotten the murder of the 34 women and the cold blooded murder of the late Yaa-Na and others during the Yendi crisis.

He denied having knowledge of the killing of the Judges and Army officer, saying “ what had they done wrong for me to kill them?”

According to him, the killing of of those at the helm of affairs in 1979 and 1982 was justified because “they were drawing the nation back, just as the NPP administration is doing today.”

He told the NDC supporters that President Kufuor is a very disgraceful element to Ghanaians and for that matter the people should not give him another chance to stay in power.

He advised Ghanaians that the 2004 elections are their last opportunity to regain their independence from President Kufuor, and if they forfeit it then the whole country is doomed ever.

He therefore urged Ghanaians to vote for Prof. John Atta Mills whom, he said, is the only person to rescue the nation from its economic doldrums.

The Brong Ahafo regional chairman of the party, Alhaji Collins Dauda, re-echoed the high prices of commodities, saying since the NPP took over the affairs of the country, prices have trebled.

Alhaji Dauda, also a Parliamentary Candidate for the area, challenged the NPP government to come out with actual price supposed to be paid to cocoa farmers.

According to him, the government is pretending as if the cost on high tech on cocoa and mass spraying exercise is borne by her.

He told the NDC supporters that the actual price per bag of cocoa is ¢800, and because the government wanted to cheat the farmers, decided to pay them with the current price.

The NDC chairman for Asutifi South, Mr. Yaw Okyere, assured the party leadership, the party would capture the four constituencies of Ahafo area, such as Asutifi North and South, Asunafo North and South this year.