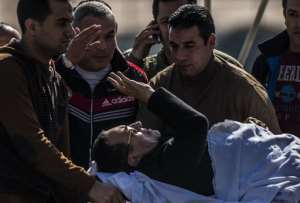 Cairo (AFP) - Zyad el-Elaimy was among millions who rallied to overthrow Hosni Mubarak in 2011, but four years later he has been visiting activists in jail even as the ousted strongman edges closer to freedom.

The jubilation that marked the toppling of Mubarak -- a key event of the 2011 Arab Spring -- is dead as activists say an even more autocratic regime now rules the most populous Arab country.

But Sisi enjoys support from many Egyptians weary of political and economic turmoil.

"Bread, freedom, social justice and human dignity," were not just slogans but the aims of pro-democracy activists who converged in their millions on Cairo's iconic Tahrir Square in a movement which overthrew Mubarak.

After his ouster Mubarak was detained and put on trial with his security chiefs on charges of involvement in the deaths of protesters during the revolt.

The charges have been dropped, bringing Mubarak closer to release.

And days before the fourth anniversary of the January 25 revolt, his two sons walked out of prison pending a separate corruption retrial with their father.

The Mubarak verdict "is a message to us... that no matter how much corruption and oppression the authorities commit, they will always get away without any punishment. And that is very painful," said Elaimy.

Meanwhile, dozens of activists who revolted against him are being held in prison for holding unauthorised protests.

"The Egyptian judiciary has shown a double-standard for justice by exonerating state officials from any guilt in committing human rights violations on the one hand; and on the other, by issuing hefty prison terms against those who exercise their civil and political rights," said the International Federation of Human Rights group.

A lower court had jailed the Mubaraks in May 2014 for embezzling millions of dollars from state funds allocated for renovating presidential palaces.

But an appeals court overturned that verdict and ordered a retrial.

"When we used to meet to plan the January 25 protests in 2011, we were expecting to be hung if the revolution failed.... Today we are paying the price for our political stances," said Elaimy, who was elected to parliament in the first polls held after the anti-Mubarak uprising.

Jailed activists include leaders of the anti-Mubarak revolt like Ahmed Maher and Mohamed Adel -- both sentenced to three years in prison, while their April 6 Youth Movement that spearheaded the revolt has been banned by a court.

Egypt is experiencing a "settling of political scores with anyone who represented the January 2011 revolution.... What is happening reflects how the state sees the revolution," said Ahmed Abdel Rabo, professor of political science at Cairo University.

The brunt of the government crackdown has targeted Morsi's supporters and members of his Muslim Brotherhood, which posted strong electoral gains following Mubarak's ouster and until Morsi's presidential triumph in 2012.

The crackdown has killed more than 1,400 people, most of them within hours when police broke up two pro-Morsi camps in Cairo weeks after Morsi's ouster on July 3, 2013.

More than 15,000 Morsi supporters are also imprisoned, while dozens have been sentenced to death after speedy trials which the United Nations has denounced as "unprecedented in recent history."

The Muslim Brotherhood itself has been designated a "terrorist organisation".

"After four years we are now fighting a harder battle against a regime that is more violent, and a public opinion that accepts crushing the opposition," said Ammar Motawee, a young Brotherhood member whose sister spent three months in detention.

Sisi has repeatedly defended his regime, and soon after murder charges were dropped against Mubarak insisted that Egypt was "on a path to establish a modern democratic state based on justice, freedom, equality and renunciation of corruption".

But for Elaimy, "nothing has changed" over the past four years.

"We are facing the same authoritarian means of managing the country, same corruption, and clampdown on freedoms," he said.

Calls to protest are not only met by rapid police action, however, but also by shrugs and even hostility from millions of Egyptians who just want a return to normalcy.