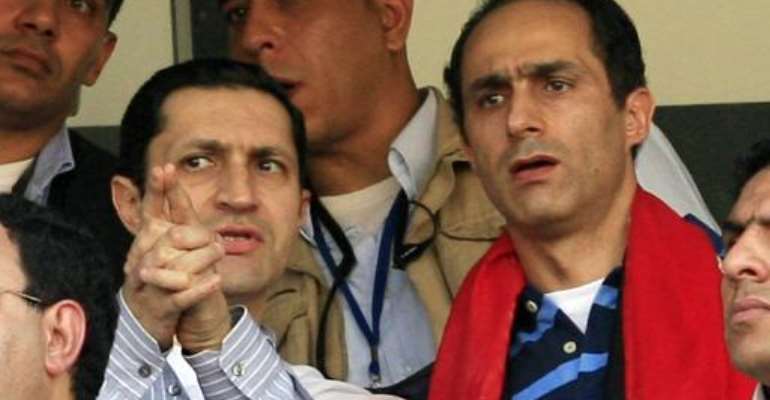 Alaa and Gamal Mubarak left jail early Friday after a court ordered their release because they had served the maximum pretrial detention, the state-owned Al-Ahram newspaper reported on its website

Mubarak, who was unseated in Egypt's 2011 uprising, was convicted by a lower court on corruption charges with his two sons last year, with Alaa and Gamal receiving four-year sentences.

Their charges included embezzling at least $16 million (14 million euros) earmarked for the maintenance of presidential palaces.

The retrial of the former leader and his two sons was ordered this month and their lawyer Farid al-Deeb said at the time that the elder Mubarak, who is in a military hospital, would also be a free man.

But state media reported there had been no orders yet for his release and there have been no signs of the 86-year-old leaving the hospital.

Ahram reported that Alaa, 54, and Gamal, 51, were transported from jail to a police station in northern Cairo before being freed.

They are both facing a separate trial for stock market manipulation.

In the last decade of Mubarak's 30-year reign, Gamal in particular was seen as the likely successor of his father and headed the powerful policies committee of the now dissolved National Democratic Party.

The release of the Mubaraks presents a dilemma for President Abdel Fattah al-Sisi, a former army chief whom opponents accuse of reviving Mubarak-era practices.

His prime minister, Ibrahim Mahlab, was a senior member of the National Democratic Party.

But he has faced accusations of being even more authoritarian than Mubarak, unleashing a crackdown on Morsi supporters that has killed at least 1,400 people.

The release of the Mubaraks so close to the January 25 anniversary of the 2011 revolt risks antagonising government critics.

After the court's announcement on Thursday, several dozen Islamists tried to hold a protest in central Cairo but police dispersed them, an interior ministry official told AFP.

Morsi, a leader of the Islamist opposition under Mubarak, is on trial over violence during the 2011 uprising in which protesters torched police stations across the country.

Critics say such charges -- pinning the blame of police violence during the revolt on Islamists -- are a revision of history that tars the uprising as a plot by Islamists and foreign powers against Egypt.