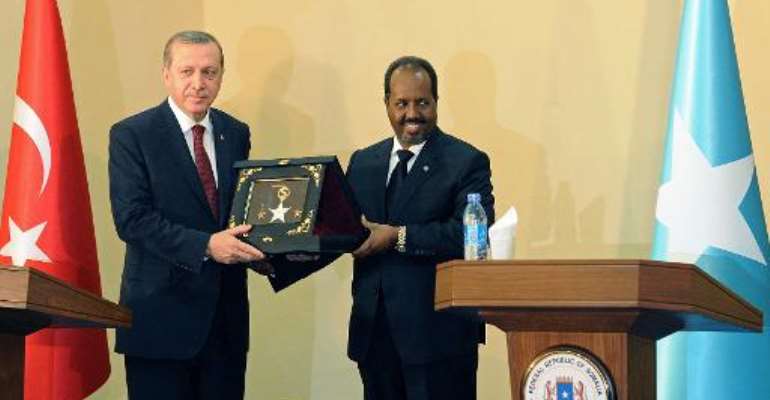 Erdogan, on a rare visit by a foreign leader to a capital hit by frequent insurgent attacks, praised the "major developments" seen in Somalia and promised to deliver more.

Turkey is a major donor to and investor in Somalia, carrying out a series of large-scale construction projects in a city devastated by more than two decades of war, and now undergoing a major building boom.

Erdogan, who was accompanied by his wife and daughter, made the one day visit under tight security.

Hundreds of soldiers and police officers shut down much of the capital's streets, where five people were killed Thursday in a suicide attack on a hotel housing the Turkish delegation in Mogadishu.

Somalia's Al-Qaeda-affiliated Shebab rebels -- who are fighting to overthrow the country's internationally-backed government -- said they carried out the bombing, the latest in a string of attacks by the group against high-profile targets in Mogadishu.

"Turkey did not hold back, waiting for stability before it invested. Instead, it invested to achieve it," Mohamud said.

"Where other international partners chose to plan their interventions from elsewhere, Turkey put its people on the ground in Somalia."

Turkey's relationship with Somalia dates back centuries, but since famine devastated parts of the Horn of Africa nation in 2011, Erdogan has forged close ties with Mogadishu and launched a raft of construction and development projects.

Erdogan last visited Mogadishu in 2011 as prime minister, the second major leader to visit the city in years, a few months after Ugandan President Yoweri Museveni.

He remains one of the most high profile visitors to the city.

Erdogan had originally planned to visit Mogadishu on Friday, but postponed the trip to attend the funeral of Saudi Arabia's King Abdullah.

The visit to Somalia ends Erdogan's Horn of Africa tour, which has included visits to Ethiopia and Djibouti, a key port on the Gulf of Aden and the entrance to the Red Sea.

Both countries contribute troops to the more than 20,000-strong African Union force in Somalia, which is battling the Shebab.

Shebab fighters have in the past three years lost swathes of territory and towns to the AU force and Somali government troops, and their leader was killed in a US air strike in September.

But they still remain a potent threat.

The Somali government, which took power in August 2012, was the first to be given global recognition since the collapse of Siad Barre's hardline regime in 1991.

Billions in foreign aid has been poured in, with the government initially hailed as offering the best chance for peace in a generation.

But, like its predecessors, it has since become mired in political in-fighting and corruption.

#EndSARS: Rawlings Urge Nigerians To Use Non-Violent Engagem...
6 minutes ago