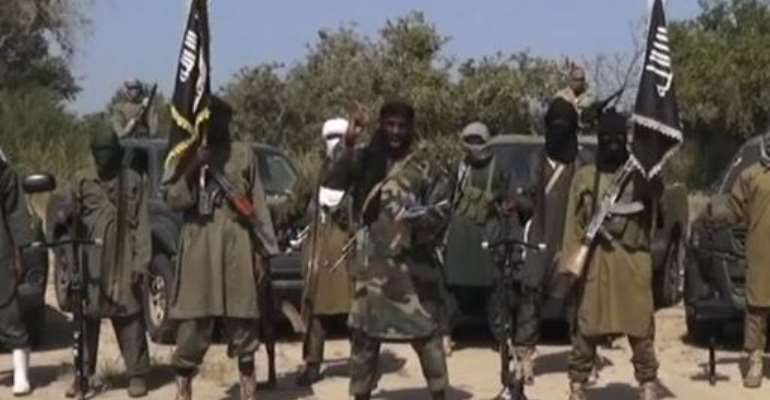 An image grab made on October 31, 2014 from a video obtained by AFP shows the leader of the Islamist extremist group Boko Haram Abubakar Shekau (C) delivering a speech. By - (Boko Haram/AFP/File)

The strategy bore fruit on Wednesday, after a day of talks in Niger's capital, Niamey, when the African Union confirmed that the headquarters of a new regional force would be based in N'Djamena.

There have been months of disagreement among the countries directly threatened by Boko Haram -- Nigeria, Cameroon, Chad and Niger -- on exactly how to take on the jihadists.

Each country agreed at a meeting in Paris last May to provide 700 soldiers for a regional force that was supposed to be deployed in November last year but has yet to materialise.

The issue came into sharp focus after the insurgents on January 3 captured the town of Baga on the shores of Lake Chad, where the borders of the four nations converge. They also overran the headquarters of an existing multi-national force.

"It's important that the countries in the region can organise themselves to be able to respond to this dramatic offensive which could destablise the whole of this region," he told RTL radio.

But veteran strongman Deby's bid for control of the proposed new force had all the appearance of unilateral action as he invoked "the vital interests" of his country.

The first salvo came on January 14, when Chad's government said it was minded to provide Cameroon's military with "active support" in its response to the "criminal and terrorist acts of Boko Haram".

"Faced with this situation which dangerously threatens the security and stability of Chad and harms its vital interests, the Chadian government would not stand on the sidelines," it added.

The following evening, Cameroon's President Paul Biya announced that N'Djamena "has decided to send a large contingent of Chadian armed forces to come and support the Cameroonian armed forces".

On the morning of January 16, lawmakers hardly had time to vote on a motion authorising military deployment to Cameroon and Nigeria before columns of armoured vehicles set off from N'Djamena.

Nigerians, on the back foot for months over their willingness to lead regional military operations, appeared to be taken by surprise.

"Any support to our operations will be welcome but it has to be properly channelled to key into our own ongoing operations, considering the fact that place is a territory of Nigeria," defence spokesman Chris Olukolade told AFP on January 17.

His words went unheeded as rumours swirled about the advance of Chadian troops.

A contingent is already in the Cameroonian town of Maltam, which is virtually opposite N'Djamena, to secure the Chadian capital's airport.

French Rafale fighter jets are based there as part of Operation Barkhane targeting jihadist groups in the Sahel region.

Paris controls the fight against Islamists in Chad, Niger, Mali, Burkina Faso and Mauritania from N'Djamena, where it has long stationed troops.

Yaounde was guarded about the methods of its neighbour, saying on January 19 that "a large contingent" of Chadian soldiers was now in the country.

Leaders of both nations' militaries needed to meet to work out precisely where to send the troops and when, said government spokesman Issa Tchiroma Bakary.

Deby's actions are in keeping with his temperament and the knowledge that in Chad, the danger for those in power always comes from border regions.

Deby experienced it first hand when he overthrew Hissene Habre in 1990 in a rebellion launched from Sudan to the east. He was then almost overrun by rebels from the Sudan conflict in 2008.

The obsession with securing borders to nip any hint of rebellion in the bud has led Deby to intervene repeatedly in the Central African Republic across the southern frontier for more than a decade.

The current threat from Boko Haram is bigger for his regime than multiple Central African uprisings have been. N'Djamena is only 50 kilometres (31 miles) from the Islamists' Nigerian strongholds.

In this regard, Deby can count on the support of his Nigerien neighbour and counterpart, President Mahamadou Issoufou.

Both men share common concerns, with one eye on the strategic region of Lake Chad, where Nigeria meets Niger, Chad and Cameroon, and the other towards Libya, where jihadist groups are at their borders.