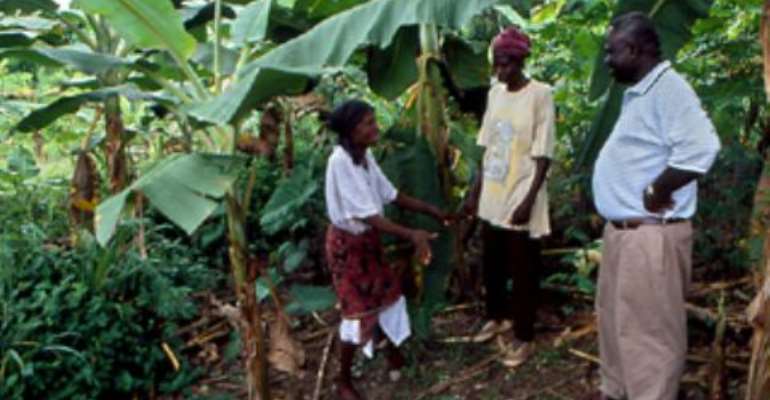 Accra, July 21, GNA- An Accra Circuit Court on Wednesday remanded Nii Amarh Ashitey, Assemblyman for La- Wireless area into prison custody for destroying eight farms valued at 10 million cedis. The court presided over by Mr Willwise Kyeremeh did not take the plea of the accused and he is to re-appear on July 26, 2004. Prosecuting, Chief Inspector Benedicta Akolgo said the eight complainants are Oscar Adjetey, Daniel Adjei Marfo, Godson Agbekey and Samuel Adu.

The rest are Emmanuel Vikoh, Joseph Edigah, King George de Charway and Benjamin Kwadwo Agyeman all residents of La-Wireless and La Aborm. The prosecutor said in May this year, the complainants cultivated about six hectares of maize on a 50-hectare land belonging to the Ghana Civil Aviation Authority (GCAA) at La in Accra.

She said soon after the complainants had sown their crops, the accused, who is the Assemblyman for the area came with an excuse that he was organising a communal labour to keep the place tidy.

She said the complainants pleaded with the accused to have patience till they harvested their crops and promised to keep the place tidy. Chief Inspector Akolgo said the accused however erected two signboards among the crops which read " KEEP OFF; NO FARMING HERE; by AMA".

She said on July 2, 2004 at about 1000 hours, the accused, unknown to the complainants organised some people to destroy the eight farms, claiming that he had "instructions from above".

His claim was however refuted when the complainants contacted the Accra Metropolitan Authority (AMA), the prosecution said.