Peter Suaka Writes: #occupyghana Must Not Be Intimidated 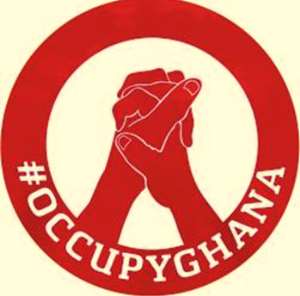 That has been the status quo all these while. If you talk, you are politically colored; A very fantastic strategy by the Politian to keep all intellectually honorable but politically averse people silent.

This should stop immediately. It should not be permitted to continue. The course of this country has been entrusted into the hands of politicians for over fifty years now and we are all witnesses to the results; subjugation and continues subjugation of the Ghanaian. They steel all the money meant for development, pass all the wrong bills into laws and use the remaining amount to fly abroad to contract trans generational loans for the Ghanaian citizens. We will not be intimidated into silence anymore.

Who does the malfeasance at the Controller and Accountant General Department benefits? Since when does government communication machinery became the mouth piece of the CAGD? I thought government would be excited that civil society organizations like IMANI Ghana and #OCCUPYGHANA are keen on the CAGD? What is the essence of demanding that members of #OCCUPYGHANA declare their political associations? Who says that people must necessarily be politicians before haven their say on social, political or economic issues in Ghana or anywhere else. Why is nobody asking the Minister of Agric, Fiifi Kwety to justify the essence of demanding that the very learned and enviable members of #OCCUPYGHAN disclose their political affiliations? Why at all should government worry if non-politicians or even political oppositions are mounting pressure on a public organization like the CAGD to intensify its efforts at cleaning the payroll? Is that a way of shutting these venerable people up? To whose benefit will that be?

Sunday times, a British News Paper in London published in December 2014 that the EU anti-fraud agency was probing a mammoth corruption scandal running into several million pounds in Ghana being aid package from the EU to support Ghana's budget. On 15th of December 2014, modernghana.com, Ghana web and many other media houses across the globe also published that EU withholds 135 million Euros budget support to Ghana over payroll malfeasance. Every decent minded Ghanaian would have been embarrassed by such a publication. Especially when such a news item that bothers on allegation of corruption by a major Ghanaian state institution like CAGD did not emanate from Ghanaian media but the British.

Where was Fiifi Kwetey, the finance minister (Hon. Seth Tekper) and Ametor Quame when Ghana's image was dragged to the gutters? And I dare ask where the president of Ghana was? Where was the 2012 KPMG audit report when those alleged payroll malfeasance was been perpetrated in 2013 and 2014 up to December of 2014? This hypocrisy must stop. The politician should give us a break. Ghana is not for the politician alone.

On the 10th of January 2015, this same Fiifi Kwetey said Mahama's presidency is an honor to Ghanaians. What a nuisance? Does this man understand the meaning of honor? Does he listen to radio at all? Why did over ten different trade unionists go on strike in 2014? Does he monitor Ghana's macroeconomic indicators at all? What is the current growth rate of Ghana's economy? And what is the current inflation rate? Where is the honor and dignity of Ghanaians if we have to surrender to the western Britton wood institution IMF to be thought how to manage our economy. Is that the honor? Can Fiifi Kwetey knock his chest and match himself to any of the members of #OCCUPYGHANA crew in terms of knowledge, credibility and qualification?

Am tempted not to blame the plenty raconteur politician anymore but our learned Professors, Doctors of Philosophies, Accountants and Charted Accountants and all manner of book-long certificated professionals, who gather all these Knowledge and certificates and yet is dubbed and cheated by just the politician because he talks big.

Can Ghana ever quantify the magnitude of embarrassment the politician has caused her? Just mention them from the 2014 alone for now; the Brazil saga, the Transparency International Global Corruption Rankings, the cocaine saga or the IMF. Beside these the politician still has the big mouth to talk louder than the king maker ordinary civilian citizen like Ante Salamatu (my Mom)?

The first chapter of Ghana's constitution states that. The sovereignty of this country resides in the people of this country. It did not say it resides in the president, the minister state nor the parliamentarian. The ordinary Ghanaian must begin to assume his position of deciding the course of this country and not the politician. The learned in Ghana must begin to use their knowledge. The Professors and Doctors must begin to contribute vociferously to social, economic and political discourses. The spirits and souls of the silent majority of Ghanaians are with #OCCUPYGHANA. We pray for you and we stand by you. May you not be terrified and intimidated into silence. You will disappoint the silent majority of Ghanaians if you fall back and rest on your odds. Please don't disappoint us! Go! Go! Go! OCCUPYGHANA!