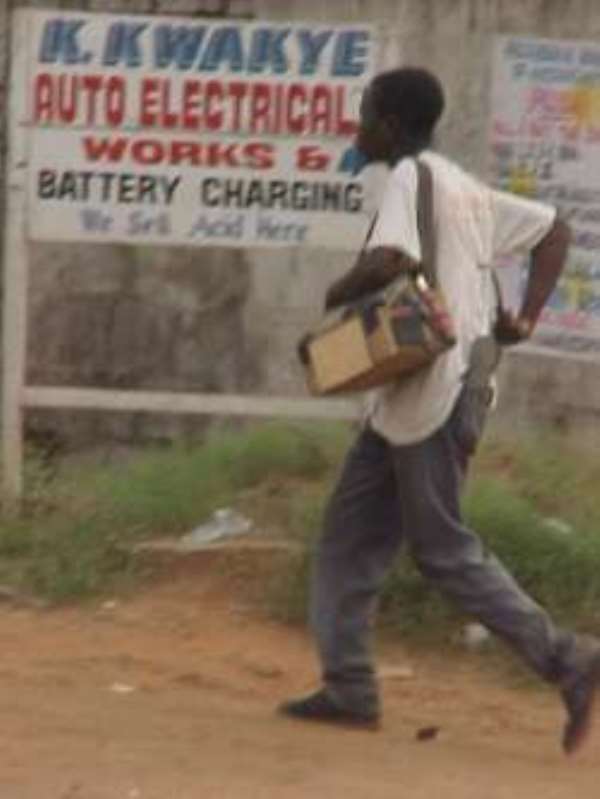 ... As major retail store wins ejection order THE VICTORY by a major retail clothing store to have a secondhand clothes hawker removed from the pavement in front of its building now threatens the existence of other hawkers, like Ghanaian “shoeshine boys”, at East London in South Africa.

The action to eject the hawkers by the law authorities has made the Ghanaian shoeshine boys (cobblers) very stranded, as they could not return home after having paid huge sums to do that job in East London, where the law was a little bit favourable for the profession.

Some of the shoeshine boys have sworn never to return to Ghana due to the economic hardship but rather turn to nearby Grahamstown in South Africa, where the profession was gradually gaining grounds.

They were not sure what would become of their businesses when the final verdict came from the Buffalo City Municipality.

Head of Traffic and Law Enforcement of the Buffalo City Municipality has confirmed that, “No hawking signs are to be erected in Buffalo street to prohibit hawkers from selling merchandise on public pavements.”

The ejection follows a yearlong dispute between Colliers International, a property management company and Brian and Lisindi Heathcote, hawkers of second-hand and used clothes.

Information gathered by The Chronicle disclosed that a newspaper in South Africa, the Daily Dispatch, first revealed that Colliers, on behalf of its tenants, Jumbo stores, which rents a clothing store in the Taxi City building in the corner of Buffalo and Jagger streets, in May in last year, obtained an eviction order against the Heathcotes to stop them from dealing in front of Jumbos.

He said the Heathcotes enjoyed an unfair advantage, as they did not pay rent, electricity, water or municipal rates.

Mr. Stephen said the police and municipal law enforcement officials had been unwilling to eject the hawkers.

The paper gathered that at one stage, Brian Heathcote even hired two guards to protect his goods on the pavement from being removed.

Attorney Collette Wheatley of Kirk attorneys, who acts for Colliers, has stated that from her clients' point of view, there could be no settlement with the Heathcotes.

In response, Brian Heathcote said his wife and him had been trading at that spot since 1995. “We are no threat to Jumbo stores. We trade in second-hand and used clothing. But since we missed one month's rental to Colliers, the problems started.”

“Where does free enterprise start? What about clothing shops that open next to another clothing shop. Why is that not prohibited?”

Heathcote said the anti-hawking regulations would apply to all. This meant that the other hawkers would also have to move from the public pavement.

Attorney Roger Smith of Hart & Beyers, who represents the Heathcotes, said he would lodge an objection about the erection of the anti-hawking signs.

Hawker Felix Poweto said that Heathcote should “face the music” alone because he was the only one who had been in conflict with the store.

They said they did not expect any ejection from the municipal law enforcement officials since they had paid all the monies for the registration to the officials.