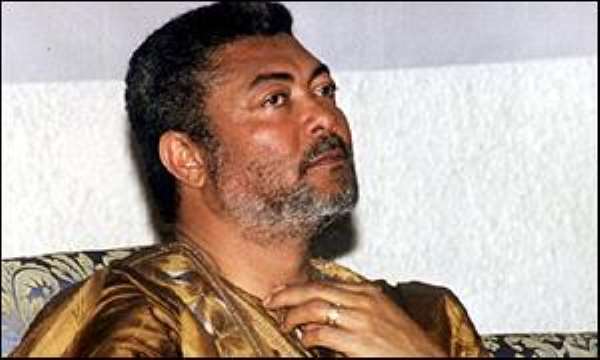 .....HUNDREDS DEFECT TO NPP, HE DID NOTHING FOR US – NDC CHAIRMAN DECLARES THERE WAS much drama at the Nima Social Centre on Saturday, July 17, when two wives of a leading member of the National Democratic Congress (NDC) angrily stormed the centre to show their support, and disagreement, respectively, with their husband's decision to defect to the New Patriotic Party (NPP), with about 350 other members of the NDC.

At the press conference to announce the defection were the two wives, Hajia Sadia and Hajia Gado. While the junior wife protested against her husband's defection, and threatened him with divorce should he go ahead as planned, the senior wife lent her support to her husband.

Mr Mohammed Tofik Abu, alias Tabasiru, was the chairman of the East Ayawaso Constituency of the NDC, between 1992 and 1998, and was joining the NPP with about 350 followers.

Towering over the seated husband the woman was as defiant in her disagreement as her husband was in his decision to defect. Elders and opinion leaders in this sprawling suburb of Accra, tried in vain, to calm the agitated woman, as she cried out in defiance, “he is my husband, it has got nothing to do with you”.

As the dramatic scene progressed, the couple were led into a secluded area of the centre to sort out their differences.

The situation, however, aggravated as the second wife of the defector, also emerged, but this time, she came to show her support for her husband. She advised her rival to stop her protestations, and with that, the protesting wife gave up the fight, and marched off the centre.

Alhaji Abu, popularly known as “Tabasiru” assigned reasons for his resignation as the lack of internal democracy in the NDC. The defector, Alhaji Tabasari, told Daily Guide that he single-handedly built the NDC in Nima at a time when the People's National Convention (PNC) was the leading party in the suburb. “ We have got nothing from our support for Rawlings, a man who claimed that his heart is in Nima, but did nothing to prove this love for the area.

I have left the party and would work tirelessly to make it impossible for the NDC to get even 30 per cent in the December polls. After my defection, confusion hit the NDC camp, and I can assure you that more and more people are going to leave the NDC.

Earlier, my second wife had been contacted by the NDC stalwarts who told her to ensure that I did not carry through my intention, because such an action, according to them, can lead to my death.Whatever that means!”, he told Daily Guide yesterday at a meeting of the Nasara Club in Nima.

“I was a founding member of the NDC, since my return from a sojourn in the United States. I held the position of chairman of the constituency, from 1992 to 1998”.