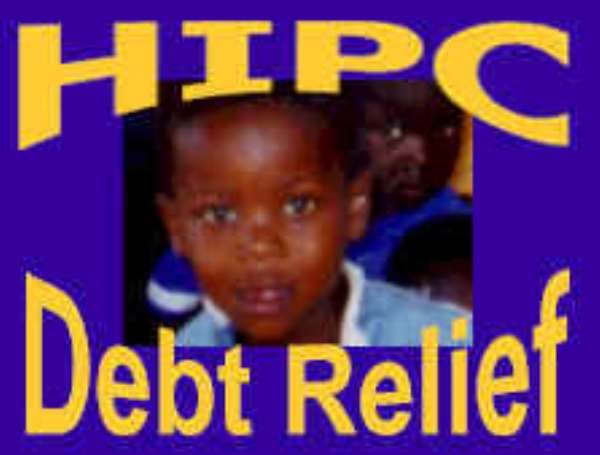 The news of Ghana attaining the HIPC completion point has not been greeted with the kind of euphoria that usually heralds all manner of good tidings, and this, according to a Week-end Agenda survey, is because, for many Ghanaians the interim reliefs so far granted the country under the initiative, provides nothing more than a cold comfort against an ever increasing levels of poverty.

The results of the random poll conducted by Week-end Agenda, over the last three days, shows that, for many Ghanaians HIPC has made no difference to their lives. Of the 36 respondents the paper spoke to, 30 said they are worse off now than three years ago, when the country embarked on the HIPC initiative. Half agreed that the provision of public toilets, village schools, litter bins, road rehabilitation, are good things, but noted that, they do not have the capacity to reduce poverty in the country.

A particular respondent, who gave her name as Alice Amponsah, described the whole HIPC idea as hypocritical and a scam, designed to perpetuate the country's dependence on its supposed benefactors. She questioned the rationale of our development partners, when they rig the rules of trade by maintaining for instance, agricultural subsidies, while they prohibit us from doing so, and also, when they engage in dumping, and in the process destroy our indigenous production base. Citing the case of the country's rice, poultry, and textiles industries, which are at the verge of collapse, Alice Amponsah pointed out that, the way to tackle poverty is to provide jobs and secure livelihoods, and not to destroy them. “When people have jobs, they will provide their own toilets,” she added.

Another respondent, questioned whether the Poverty Reduction Strategy Paper, prepared at the instance of the IMF and World Bank, makes provision for protecting infant industries as a way of creating jobs and securing them? Speaking to the Week-end Agenda in the same poll, the Peoples' National Convention's (PNC) presidential candidate, Dr. Edward Mahama said HIPC has not been worthwhile the trouble. He described the government's decision to opt for HIPC as unfortunate, explaining that, had the PNC won the 2000 elections, his government would have set up a committee comprising of the incoming PNC Finance Minister, the outgoing National Democratic Congress (NDC) Finance Minister and representatives of the donor community to audit the country's debt. He believes a PNC government could have secured a 40% write-off of Ghana's debt through traditional debt relief mechanisms without going HIPC.

Mahama accused the National Patriotic Party (NPP) government of playing political game with the lives of Ghanaians, by claiming that the country is now out of HIPC, when in actual fact we are just about to be admitted into the club.

The PNC leader intimated that, his party is undertaking a cost - benefit analysis of the HIPC initiative, the results of which he said, will show whether the country has gained or lost by opting for the HIPC initiative. He believes however, that HIPC has made Ghanaians poorer than they were in March, 2003.

Reached for his reaction to the news, the Hon. Moses Asaga, Minority Spokesman on Finance said, “there appears to be a fundamental misunderstanding of what 'reaching the HIPC completion point' means”. This misunderstanding, he explained, stems from the manner in which the government and sections of the media have presented the news. An erroneous impression, he said, is being created to the effect that, having reached the completion point, Ghana has shed its cloak of HIPC, or in other words, assailed its poverty status. According to Asaga, the IMF and World Bank's definition of the completion stage, is that we have met all the stringent conditionalities including cost recovery of utility prices, increase in fuel prices, privatization of SOE (State Owned Enterprises) including GCB (Ghana Commercial Bank) etc. and therefore confirm our willingness to belong to HIPC.

Ghana, Asaga explained, would have been out of HIPC “if it could boast that from the decision point to date, our per capita income, which stood at $370 is now $800 or more, and also that our debt is now sustainable”. “But this”, he added, “is far from it”.

Speaking with the humility of a repentant Christian, the Deputy Minister under the NDC regime, cautioned that, the same World Bank praised the former President Rawlings and called Ghana, the Star of Africa for as it were, successfully implementing the Structural Adjustment Programme and PAMSCAD of the 1980's and Enhanced Structural Adjustment Programme of the 1990's, leading to Dr. Rawlings being given an award by the U.S. Corporate Council on Africa in 1998, in Houston, only to turn round in 2000/2001 to accept that Ghana is HIPC. He questioned what Uganda, the first country to reach completion point of HIPC about four years ago, has to show as economic success story for Africa?

Sharing his thoughts on the issue, Vitus Azeem, of the Centre for Budget Advocacy (CBA) of the Integrated Social Development Centre, expressed some reservation about the news that Ghana has reached the completion point of HIPC, saying, “it's been pretty quick, and coming at a time when we still have not made good our pledge to privatize some State Owned Enterprises (SOE) and institute reforms in the energy sector, there is cause for suspicion”. This suspicion, according to Azeem, gains more currency against the timing of the announcement, given that we have just about four months to elections.

On the likely impact of HIPC on our national development efforts, Azeem explained that, because the benefit is spread over 20 years and is to be enjoyed in bits as and when the debts become due for payments, it will not make any significant impact, in terms of turning the economy around. What is required at this stage, he said, are innovative policies, that combined with the relief under HIPC would restore our fast crumbling production base. Whether or not our multilateral donor partners would grant us that space for indigenous policy engineering, is a question, whose answer will prove the goodwill or otherwise, of the HIPC programme, he said.

The HIPC initiative was to end this year, but has been extended to 2006, a decision which analysts have described as indicative of the failure of the programme to deliver on its goals. According to a World Bank report, only $31 billion of the $100billion planned relief, has been disbursed under the programme, eight years after it was launched. How deep and sincere is the commitment to reduce global poverty by 2015?