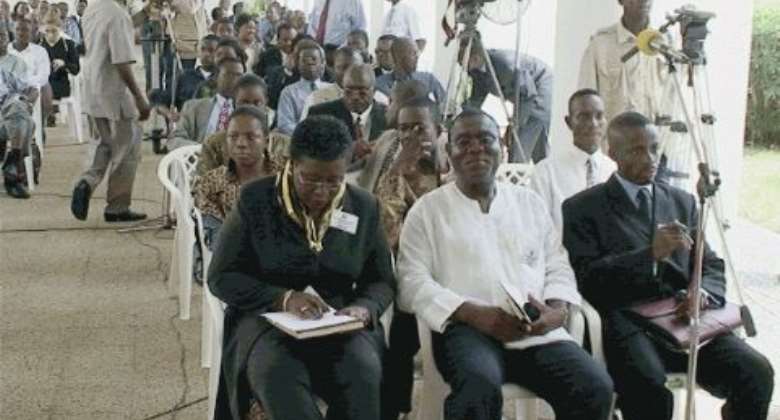 The Brong Ahafo (B/A) Regional Police Commander and Assistant Commissioner of Police (ACP), Asiedu Akrofi, has lambasted journalists and asked them to go back to school and learn more.

According to him, all they published were rubbish. Mr. Aisedu Akrofi continued that it was only politicians who were afraid of journalists, not he a police officer, because he could be damaged today but be promoted tomorrow.

Mr. Akrofi, who laid emphasis on the independent media, echoed that the repeal of the criminal law was rushed and this had given the licence to journalists to defame people.

The B/A police boss made this declaration when he invited this reporter to his office to query him on why he had reported that he was in trouble.

On Wednesday July 14, The Chronicle carried a story in its center spread that the Regional Police Commander had been dragged to court by a businesswoman, Georgina Addai, over an allegation that Mr. Akrofi had taken an Opel Vectra, mobile phones, its accessories and huge sums of money from her husband to influence his decision on a case the woman was standing trial at a circuit court at Fiapre, near Sunyani for. The charge of the woman was, she had defrauded her husband, Desmond Charmant.

Mr. Akrofi, who was very furious, said the independent media had nothing to offer and that he purchased only the state newspapers like The Daily Graphic and The Ghanaian Times.

He went ahead to reiterate, “ Their editors would sit there and also publish anything they had.”

He accused this reporter of having done no investigation into the case before coming out with it. However, the commander was made aware that all that was published in The Chronicle had been quoted from the writ filed by Georgina Addai.

He was made to understand that his version, being the defense entered by him and the Ghana Police Service through the Brong Ahafo Chief State Attorney, denying the allegation, had also been published, but the commander would not take kindly to that.

According to him, his worry was the caption of the story: “ Police Commander in big trouble” and wanted to know from the reporter the sort of trouble he was facing.

He disclosed that, he had had permission from the Inspector General of Police (IGP) to sue the woman (Georgina Addai) for defaming him, adding, “You are lucky that this story did not come in time, other than that, I would have added you to the suit,” (referring to this reporter) he said, threatening that he would drag The Chronicle and this reporter to court to explain to him the trouble they claimed he had.

Refering to the woman who had dragged him to court, Mr. Akrofi questioned, “How could you defame the whole Police Service and tomorrow when you get a case, you come to them for help?”

He disclosed that the woman was facing a criminal case against him at the court for defrauding her husband of one billion cedis. How come he the commander was in trouble?

At a point, he warned this reporter not to step in his office, because he hated nonsense.

Present with the commander were his Public Relations Officer, another senior police officer and Mr. Edmond Gyebi, a reporter of The Chronicle who had accompanied this reporter to the police regional headquarters.

Gov’t to set up 5-member committee to lead extensive stakeho...
23 minutes ago