IMF And World Bank Support US$3.5 Billion in Debt Service Relief for the Republic of Ghana 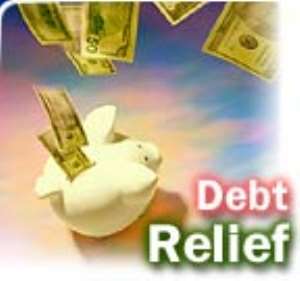 Total debt relief under the enhanced HIPC Initiative from all of Ghana's creditors amounts to US$3.5 billion in nominal terms[2]. This assistance is equivalent to a reduction in net present value (NPV) [3] terms of US$2.2 billion, as agreed at the decision point. Ghana qualified under the fiscal criterion and the debt relief was calculated to bring the NPV of debt-to-government revenue ratio down to the HIPC threshold of 250 percent.

IDA will provide debt relief under the enhanced HIPC Initiative amounting to US$1.4 billion in debt service relief (US$782 million in NPV terms), to be delivered through a 67 percent reduction in debt service on IDA credits from 2002 to 2022. The IMF will provide debt relief of US$112 million in NPV terms on payments falling due to the IMF during 2002 to 2009. The remaining bilateral and multilateral creditors are also expected to provide their share of relief required under the enhanced HIPC Initiative. In addition, many bilateral creditors have indicated their intention to provide additional relief beyond the enhanced HIPC Initiative (estimated to total about US$500 million in NPV terms). Between 2004-2013, Ghana would save approximately US$230 million annually in debt service costs.

Debt relief, together with bilateral assistance beyond HIPC relief, will lower Ghana's debtâ-'toâ-'export ratio to 84 percent, and its debt-to-government revenue ratio to 130 percent in 2004. Those levels are 66 percentage points and 120 percentage points, respectively, below the HIPC thresholds.

Resources made available by debt relief under the enhanced HIPC Initiative are being allocated to fund pro-poor expenditure programs, as outlined in Ghana's Poverty Reduction Strategy (GPRS) Paper, which was completed in February 2003 using an extensive participatory approach. The GPRS has five strategic pillars: (i) macroeconomic stability; (ii) production and employment; (iii) human resource development; (iv) special programs for the vulnerable and excluded; and (v) governance.

Ghana's average GDP per capita over the past decade was approximately US$300. The proportion of the population living in poverty fell steadily from 51 percent in 1992 to 39 percent in 2000. Though human development indicators have generally improved over the same period, a recent survey shows a rise in child and infant mortality rates. In addition, Ghana still has significant disparities in the poverty distribution, especially in its northern region.

Following the implementation of prudent fiscal and tight monetary measures in recent years, Ghana has achieved a fairly stable macroeconomic environment and has made a robust recovery. Real GDP growth accelerated from 3.7 percent in 2000 to 5.2 percent in 2003. Nevertheless the challenge of achieving long-term debt sustainability and sustained growth will require continued reforms and fiscal vigilance.

Poverty-related expenditures in Ghana have increased from 4½ percent of GDP in 2001 to 6½ percent in 2003. This is complemented by an improved public expenditure management system. The country has also made progress in improving the investment climate as well as demonstrating a strong commitment to the rule of law and good governance. With sustained support through mechanisms such as the recent GPRS-based Multi-Donor Budget Support framework, Ghana has the potential to further reduce poverty levels and achieve some, if not all, Millennium Development Goals.

(i) completion of a full PRSP through an extensive participatory process, and satisfactory assessment by the Bank and Fund;

(iii) implementation of key structural reforms in governance, education, and health. All of the completion point triggers were met, with the exception of one relating to petroleum pricing.

In 1996, the IMF and the World Bank launched the HIPC Initiative to create a framework for all creditors, including multilateral creditors, to provide debt relief to the world's poorest and most heavily indebted countries, and thereby reduce the constraint on economic growth and poverty reduction imposed by the debt build-up in these countries. The Initiative was modified in 1999 to provide three key enhancements:

· Stronger Link Between Debt Relief and Poverty Reduction. Freed resources were to be used to support poverty reduction strategies developed by national governments through a broad consultative process.

To date, 27 countries- two-thirds of the HIPCs - have reached their "decision points" under the enhanced HIPC Initiative Assistance and are receiving debt relief from all sources that will amount to more than US$53 billion over time, and an average NPV stock-of-debt reduction of nearly two-thirds.

[2] Nominal terms means the actual dollar value of debt service forgiven over a period of time.

[3] The Net Present Value (NPV) of debt is the discounted sum of all future debt-service obligations (interest and principal). It is a measure that takes into account the degree of concessionality of a country's debt stock. Whenever the interest rate on a loan is lower than the market rate, the resulting NPV of debt is smaller than its face value, with the difference reflecting the grant element.

Mankessim: 55-year-old kenkey seller knocked down by speedin...
45 minutes ago