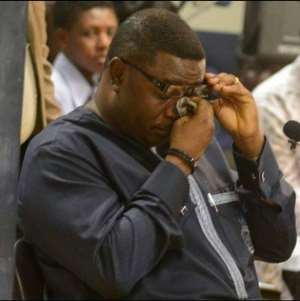 Elvis Afriyie Ankrah
Former Minister of Youth and Sports, Elvis Afriyie Ankrah, is struggling to wean himself out of an alleged bribery scandal in connection with the 2014 FIFA World Cup campaign involving a whopping GH¢280,000 (¢2.8 billion).

This follows the emergence of some documents pointing to allegations that E-Volution International, the events and marketing company contracted by the World Cup committee to organise four public viewing centres in Accra, Kumasi and Takoradi during the 2014 soccer fiesta in Brazil, paid some monies to Mr Afriyie Ankrah.

The Chief Executive Officer (CEO) of the events company, Fred Darko, was also the Project Coordinator for the 2014 World Cup, which raises a potential case of conflict of interest.

It involves three payment vouchers which were approved by E-Volution for the alleged payment of money to Elvis           Afriyie-Ankrah, the then Minister of Youth and Sports – now a Minister of State at the office of the president – an official of Ghana National Petroleum Corporation (GNPC) and the operations committee of the Brazil 2014 World Cup.

All the three payment vouchers were issued for payment on June 11, 2014 and approved and signed by the Chief Executive Officer (CEO) of the company, Fred Darko.

Both the former minister and E-Volution have denied the allegations, saying they are attempts to soil their reputation.

Mr Afriyie-Ankrah claimed that the payment vouchers were forged.

Payments
In his case, the voucher indicates that an amount of GH¢100,000 was supposed to have been paid to him as 'production cost (Brazil -2014)', with an accompanying directive to one Alfred, the company's accountant, to  'Pls deal as PR to Elvis A. Ankrah. FD.'

Another payment voucher of GH¢100,000 with the same description was also supposed to be paid to the world cup committee as 'honorarium to Brazil 2014 committee members,' with the third alleged payment of an amount of GH¢80,000 as 'PR-GNPC (Brazil 2014)' going to a Ghana National Petroleum Company official, Samuel Ledo, Chief Procurement Officer.

After initial denial that no money was paid to him after documents were showed to him, Mr Ledo allegedly conceded receiving the money but claimed it was for a different business transaction.

According to Joy FM's Manasseh Azure Awuni who dug into the matter with documentary evidence, the payment was made by the accountant of E-Volution, Alfred Padi, on June 12, 2014 into Ledo's GCB account with the Kaneshie branch—the same day he withdrew the amount from E-Volution account with the Airport Branch of UT Bank.

The GNPC Chief Procurement Officer denied receiving any payment from Alfred Padi's E-Volution but when he was confronted with the evidence, he made a u-turn, admitting that he received that amount from the accountant of E-Volution.

He, however, said it was a private deal with him and refused to disclose what deal he had with Alfred.

Investigations also revealed that on June 11, 2014, Mr Ledo received two separate cheques of GH¢44,000 and GH¢20,000 from two private individuals which were quite distinct from the GH¢80,000 received from E-Volution.

Mr Ledo told Joy Fm none of the three payments were a bribe but insisted they were accrued from private transactions he would not disclose.

GNPC Probe
The GNPC has ordered a probe into the alleged payment.

'The attention of the Ghana National Petroleum Corporation has been drawn to a media story alleging that a named member of our staff may have received improper payments from a company that performed a contract on behalf of the corporation.

'The corporation takes a serious view of these allegations.  We have accordingly instituted an inquiry into the matter,' Alex K.M. Mould, Ag. Chief Executive, said in a statement issued yesterday.

The GNPC had paid a cheque of GH¢1 million into E-Volution International account on June 9, 2014 for contract to provide screening for the world cup in the four centres.

It was said to have been paid with a National Investment Bank (NIB) cheque number 076597. The payment was made into E-Volution International Account number 0001124057015 with the Airport Branch of UT Bank.

Responses
Mr Afriyie-Ankrah has, however, denied receiving any such amount from E-Volution International.

'Whoever signed this document, or whoever, whether the person took it in my name or what, we need to investigate because nothing like that happened,' he told Joy Fm's Manasseh.

The chairman of the World Cup Operations Committee, Joel Nettey, as well as some members of the committee told the journalist no such amount came to the committee.

Bad Blood
Company secretary and director for E-Volution International, Alex Abban, also told the radio station the company did not make any payment to the three categories of persons but could not confirm or deny the issuance of the payment vouchers.

'I would not be surprised that these are documents from E-Volution. I would not want to challenge that one,' he said, adding that it did not mean an admission that the documents were from the company.

When asked about Fred Darko's signature on the three internal payment vouchers, he said one of them appeared forged but refused to comment on the other two.

'I would not want to say clearly that all three signatures are forged ones,' he said. When Manasseh insisted that Fred Darko, who was present during the interview, should confirm or deny the authenticity of his signature, Lawyer Abban said Mr Darko would not speak on the matter for now.

Alex Abban, who is the lawyer for E-Volution, added: 'I would not be surprised that this is a cooked story to get at E-Volution,' despite the documents having the signatures of Fred Darko (the CEO) on them.

Mr Abban suspected that a dismissed finance director of the company could possibly be behind what he claimed to be a 'smear campaign' against E-Volution.

'It is surprising that the finance director is missing in all of this drama…In recent times, a lot of things have happened at E-Volution leading to the dismissal and total disengagement with some of the people who used to be there including the finance director.

'We have actually made reports to the police to carry out further investigations into this matter,' the lawyer told Joy Fm .

He insisted that the document in possession of Joy News 'does not irresistibly point that bribes have been paid' to the state officials.

'Because payments that were made that correspond to these figures were for other purposes than what we have seen on these documents,' Mr Abban stated.

'The authenticity of that document is being challenged. Indeed I am told the police have tried to invite Manasseh for the past three days but had been unsuccessful. It is important that Manasseh responds to the police investigations to help us all unravel the true facts about these documents since they smack of forgery.'

Meanwhile, the police have invited Manasseh Azure-Awuni for interrogation about what they called 'forged signatures'.