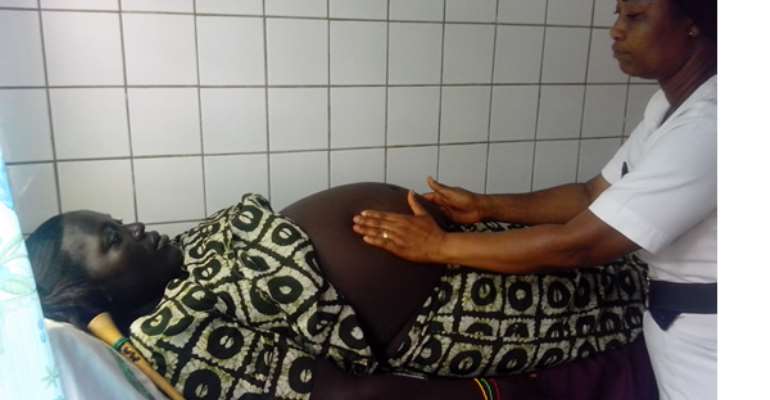 The bracelets look fashionable and elegant on the hands of pregnant women. And a first timer is likely to mistake the pregnant women for Ghana Black Star fans. However, it is more a certification or an insignia to show that the pregnant women wearing it were taking their Sulpadixine Pyramethanine (SP) drugs.

The SP drug is an Intermittent Preventive Treatment of Malaria for Pregnant Women (IPTp). Health experts say Malaria infection during pregnancy can have adverse effects on both mother and foetus, including maternal anaemia, foetal loss, premature delivery, intrauterine growth retardation, and delivery of low birth-weight infants (<2500 g or <5.5 pounds), a risk factor for death.

Madam Princila Asor Frimpong, Public Health Midwife, in-charge of the Reproductive Child Health (RCH) Unit at the St. Elizabeth Catholic Hospital at Hwidiem, has been explaining that the introduction of the SP drug with bangles, was to encourage pregnant women attend regular antenatal clinic and take the tablets in order to prevent malaria.

Research findings are that Malaria was the leading cause of death among pregnant women in Ghana, a situation which prompted the Ghana Government to introduce the SP drugs to prevent malaria and reduce maternal mortality.

Mr. Peter Yeboah, Director of Health Services in the Catholic Diocese of Goaso, observed that a baseline study has shown a drastic reduction maternal mortality.

He explains the introduction of the SP with the bracelets project is now a means of incentivizing pregnant women to attend antenatal clinic and take the SP drug. This simple approach he noted caught on well among pregnant women and their communities.

Similarly, Madam Frimpong states that as a result of the continuous education and sensitisation through outreach programmes as well as other ongoing related programmes, more pregnant women within the Asutifi South District and beyond now patronize antenatal clinic.

As a result of effective supervision in administering the SP drug to the pregnant women over a five-year period, Mr. George Osei-Owusu, Statistician at the Hospital, reported a 58.35 per cent reduction in malaria among pregnant women and recorded a 56.53 percentage increase in Child death deliveries at the facility.

The Statistician also intimated that the intervention of SP with bangles project for pregnant women and the collaborative efforts of Traditional Birth Attendants (TBAs) in the area, as well as other interventions including the Project Five Alives!, Insurance for pregnant women and the sensitization embarked upon by the Hospital's outreach team in surrounding communities has contributed to improved maternal and child health, and the significant reduction in maternal and infant mortality rates at the hospital.

Some pregnant women at the RCH recounted how the bangles served as a reminder of their next antenatal visit, as well as encourages other pregnant women in homes to visit the health facility. They even expressed reason why they loved wearing the bracelets, stating that it symbolizes they were healthy and would give birth to healthy babies.

A pregnant woman, Madam Gladys Akom, a mother of four who resides at Nkrankrom, about six kilometers (6km) from Hwidiem, says her curious peers asks her about why she wears the bangles. She in turn, explains to them about the importance of the SP drug, which prevents malaria among pregnant women and ensure good health and that of the foetus.

“Every pregnant woman should try and take the drug to keep them and their babies healthy”, she advised, and affirmed that the drug makes her and the foetus feel stronger.

With a shyly smile, Madam Kotime Alhassan, another pregnant woman from Nkaseim, a hairdresser and a mother of one, who has not taken the drug during her first pregnancy, related the difference she feels.

Like Madam Gladys, Madam Kotime also said a pregnant woman who inquired from her what the bracelets was all about, later followed up at the hospital to attend antenatal and take the drug.

There is no doubt that the introduction of the bangles has increased the number of pregnant women visiting the antenatal and taking the SP drug, as a lot of them from other Districts such as Asunafo North and South and even some from as far as the Western Region travelled to access healthcare at the facility.

Elaborating further, Madam Theresah Ankamaa and Madam Grace Obiyaa, Staff Midwives at the RCH Unit stated that before administering the drug pregnant women in their second trimester of the pregnancy or during 16 to 20 weeks of gestation, were examined before being administered with the drug, adding usually women who show indications of full or partial defects of drugs containing Sulphur are taken out of the programme and offered alternative malaria preventive drug.

There is this aura of belief among the pregnant women and people in their communities that any expectant mother without the bangles was unsafe, thus it becomes obligatory for pregnant women in such communities to attend antenatal clinic and get her share of the 'healthy bangles'.

Challenges
The programme which has increased the ANC attendance has also put a lot of pressure on the few staff at the RCH Unit who had to work for long hours.

There has been an oversubscription of the SP drug at the Hospital and limited as well as delayed supplied of the drugs, which puts additional drain on the hospitals' internally generated funds which is used to purchase the SP drug to administer to the pregnant women for free.

Another challenge has to do with sustaining the programme of free administration of SP drug to pregnant women for the future vis-a-vis the need for improved quality healthcare delivery to the people in rural areas.

Conclusion
The success story of how bracelets contributed to increasing ANC attendance, shows that with commitment, local innovative schemes and consistency in education we can significantly reduce maternal deaths, improving maternal and infant health, and ultimately inch closer to meeting the health related Millennium Development Goals in the country.

I planned my fake pregnancy with my mother, I used silicone ...
55 minutes ago