Nduom To Contest On NPP Ticket 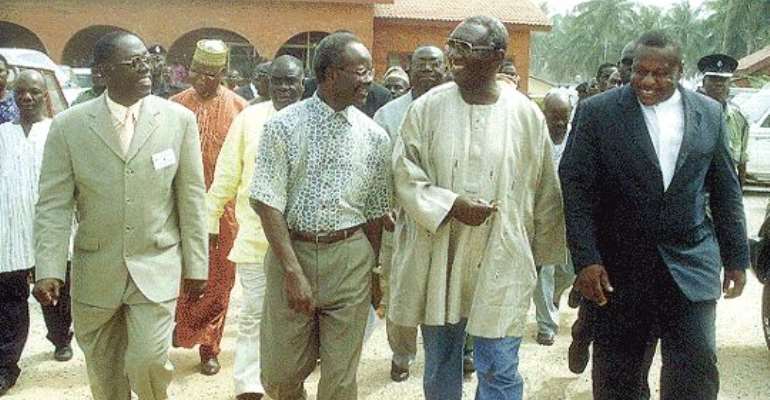 President Kufuor announced at Elmina on Saturday that the NPP has given the Minister of Energy, Dr. Paa Kwesi Nduom, its consent to contest the parliamentary seat for the Komenda-Edina-Eguafo-Abrem (KEEA) constituency on the NPP ticket.

The NPP's existing parliamentary candidate-elect, who is the current KEEA District Chief Executive (DCE), Nana Ato Arthur, is therefore, to step down to enable Dr. Nduom to intensify his campaign to unseat the sitting NDC Member of Parliament in the December election.

Speaking at a durbar to climax this year's Bakatue Festival of the chiefs and people of the Edina Traditional Area, President Kufuor urged supporters of the NPP to throw their weight behind Dr Nduom “to ensure that their voice was heard in parliament.”

He said, “Nduom has done the work that I entrusted to him. If not, I would have sacked him long ago.

“He is very hard-working and knows the job, so I am appealing to you to support him to represent KEEA in Parliament” the President told the constituents.

Responding, Dr Nduom was full of praise for the NPP government. He urged the people to support the party's policies and programmes.