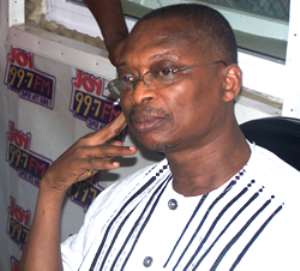 Majority of Ghanaians are frustrated with the current erratic power supply in the country. There has been so many justification and explanations from government, the Public Utility Regulation Commission (PURC), Volta River Authority (VRA), Ghana Grid Company (GRIDCo), the Electricity Company of Ghana (ECG) and other stakeholders.

The more these explanations are given, the more the situation seem to gets worse.

Nana Yaa Jantuah of the PURC, speaking in an interview with Kwami Sefa Kayi said even though we are crisis, government is working around the clock to put things right.

But contributing to a panel discussion on 'Kokrokoo', Wednesday, Managing Editor of the New Crusading Guide Newspaper, Abdul Malik Kweku Baako Jr retorted that “we are tired of hearing the same explanations over and over again…” and further described the numerous explanations and justifications as an “inept rationalization by a bunch of licensed irritants”.

To him the country cannot continue discussing the same issue because “it is a source of irritation…I am not interested in continuing to interrogate inept rationalization that a bunch of licensed irritants are giving us… they are irritating everybody. Those who are talking and explaining and rationalizing; I am beginning to perceive them as a bunch of licensed irritants. We are being faced by a gargantuan failure…I am tired”.

Meanwhile, James Agyenim Boateng, a Presidential staffer has again assured Ghanaians that once the Atuabo Gas starts, the situation will get better.

Speaking on the same platform, he said players in the sector are working around the clock to stabilize the energy situation in the country, and expressed the hope that gas from Atuabo would come on stream as soon as possible to power thermal generators, including the Aboadze Thermal Plant.