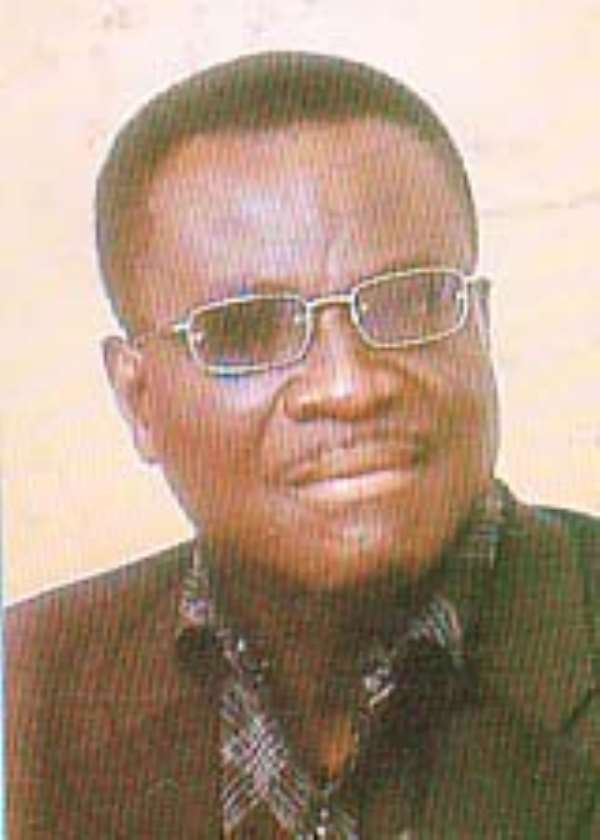 WE'LL PURSUE CHRIS ASHER ... Until rule of Law takes effect FAMILY MEMBERS of the late Mr. Ebenezer Ofori Katipie, who was allegedly murdered by Chris Asher, a lawyer, in September 1982, yesterday organized a protest outside the premises of the Old Parliament Building which houses the National Reconciliation Commission (NRC), where Asher had gone to be cross-examined by Mr. Tsatsu Tsikata, the former chief executive of the Ghana National Petroleum Corporation (GNPC).

The relations of the deceased, including his 24 children, clad in mourning clothes and holding banners, had to remain at the two gates leading to the NRC premises, since the presence of the fully armed heavy national security personnel denied them entry.

The banners had inscriptions such as “Uphold the rule of law,” “Arrest Chris Asher, the dangerous man in our society,” “He killed our father,” and “He is wicked, cruel and a killer,” among others.

According to a family spokesman, Mr. Padmore Kofi Ampadu Okyere, the family would pursue Chris Asher until the rule of law takes effect. “We will not let him have peace,” he asserted.

Mr. Okyere noted that the court's extradition order for the arrest of Chris Asher to stand trial for murder had expired and that the family members were determined to cause a civil arrest of Asher.

“We are determined to sent him to court,” he emphasized.

He explained that they were declaring war against Asher since the law was not working.

They accused the Attorney General, the Inspector General of Police (IGP) and the entire police administration of not pursuing the trial of Asher.

Mr. Okyere said the family members were aggrieved that the murder of their father was not taken seriously as was done in the murder of the three high court judges and the retired army officer.

“We were waiting for the rule of law and we never got it,” they cried out.

The family, waiting to confront Asher at the end of his cross-examination, never succeeded as the national security apparatus once again smuggled him out.

He had once more escaped from them. Earlier on he denied having committed any murder.

According to Asher, he was prepared to face any court of law, adding that his pursuers were only out to tarnish his reputation.

A few minutes after he was called to the witness chair and reminded of his earlier oath, he told the commission, “I need to apologize to the commission for my delay. I don't want to be seen as a runner, I am not a runner.”

During the cross-examination, Chris Asher again was at his dramatic and abusive best and the chairman of the commission, Justice Amua-Sekyi, had to draw his attention to retract the comments, upon the request of Mr. Tsikata.

The cross examination was nearly called off when Mr. Tsikata drew the attention of members of the commission to a writ filed he had against, Justice Amua-Sekyi, about his handling of the affairs at the commission.

Justice Amua-Sekyi contending that Mr. Tsikata was not prepared to cross-examine the witness told Chris Asher to leave the chair.

“We are not proceeding with this matter. I don't want the proceedings to be interrupted, since Mr. Tsatsu has an objection.”

“I have no objection to the cross-examination, I only want the members to be aware of the case,” Tsatsu retorted.

When proceedings began, Mr. Tsikata denied all the allegations leveled against him, and put it to Chris Asher that all that he had told the commission was a ploy to get an immunity to come to Ghana to malign certain people.

“It was a malicious deception aimed to take us away from the murder charge,” Tsatsu charged.

At this, Chris Asher could not control his emotions and charged, “I came to Ghana to tell the whole truth. I am fearless. It was a trick by you. I know it was in your chromosomes that you and your uncle, Kojo Tsikata, planned together with Rawlings to murder the people.”

Asked if that was another way of authenticating his hearsay evidence, Chris Asher refused to answer, but said he gave his opinion on the basis of what he was told by Amedeka and Dzandu when they were in prison and he (Asher) was their advisor.

Describing Tsatsu Tsikata as a “juju man and Lucifer,” among other unprintable words, he reiterated that the abduction and murder of the three High Court judges and the retired army officer was a conspiracy among Tsatsu Tsikata, Kojo Tsikata and the chairman of the defunct AFRC, Jerry John Rawlings.

He accepted various irreconcilable evidence he gave to the commission in respect to his hearsay episode, adding “I acknowledged that it was a historical error. And I told the commission when your uncle Kojo Tsikata came here that it was an era of pressure.”

But Tsatsu pressed on: “Well, I just want to demonstrate that you are not a credible witness,” Tsatsu observed.

Chris Asher, who recounted what he had earlier told the commission, submitted that Amedeka, the only living witness to the murder issue, will come if people like Mr. Tsikata and his cohorts will not give him a death threat.

“I believe everything that he told me because he had no reason to lie. You people (referring to Mr. Tsikata) and Rawlings wanted to assassinate Amedeka through Gyiwa,” he said.

He told the commission that the former President, Jerry John Rawlings, was reported to have been invited by a juju man called Yeye Boy for a power and Torgbui Adeladza was laid on a table and given 24 lashes under the auspices of Tsatsu Tsikata.

We must tackle poverty as national security threat – Parliam...
59 minutes ago