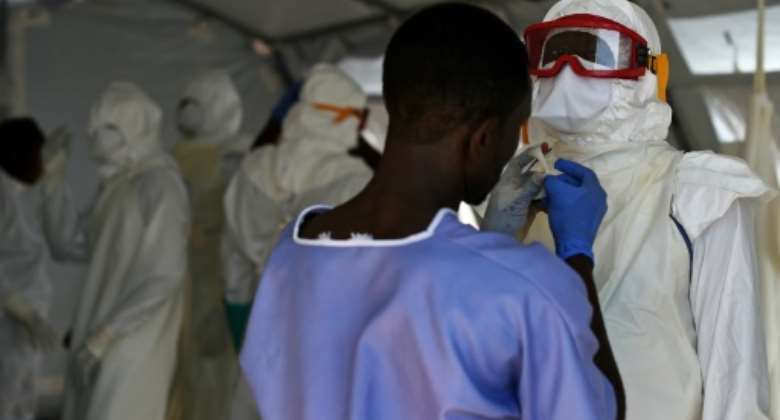 Health workers put on their personal protective equipment in the Kenama treatment centre run by the Red Cross Society on November 15, 2014 in Kenema, Sierra Leone. By Francisco Leong (AFP/File)

Freetown (AFP) - Sierra Leone has not recorded a single new case of Ebola in the past four weeks, the authorities said, keeping the west African country on course to being declared free of the killer virus next month.

"Sierra Leone has no Ebola-positive case recorded in the country for the fourth consecutive week," the head of the government's National Ebola Response Centre, Palo Conteh, said at a press conference, adding that there were no more people in quarantine either.

Since first emerging in December 2013, the worst outbreak of Ebola in history has infected 28,000 people and left some 11,300 dead -- almost all in Sierra Leone, Liberia and Guinea.

All three countries have now gone two straight weeks without any new confirmed cases, a new milestone in the fight against the haemorrhagic fever. Liberia has already been declared free of transmission.

The World Health Organization says a country can be declared Ebola-free 42 days after the last confirmed case has tested negative twice for the virus, once after each 21-day maximum incubation period.

For Sierra Leone, that day falls on November 8.

But the country's progress was overshadowed Wednesday by news of a study which found that the virus may persist in some men's semen for nine months after they were initially infected, longer than previously known.

The first long-term study of its kind, published in the New England Journal of Medicine, adds to growing evidence that Ebola can linger in the body, causing health problems for months or even years.