No Bright Future With Dim MPs! 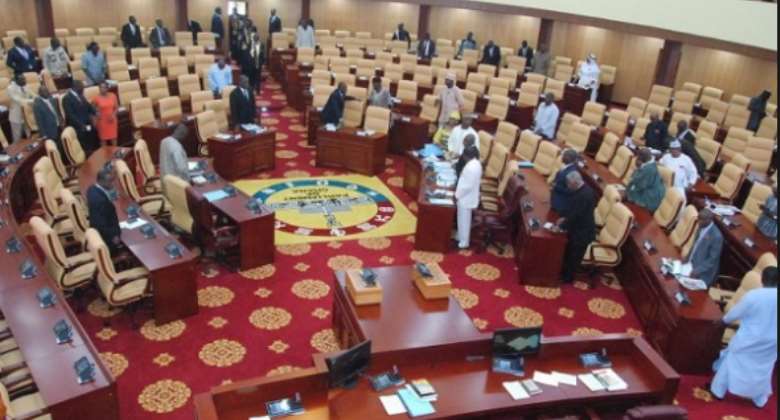 Members on the Government Benches with excitement and great enthusiasm fall over themselves to praise and glorify the budget no matter how lame and callous the policies just read to them are.

And why wouldn't they do that?
In all fairness to their intelligence, it is the politically smart thing to do. The loudest and most indecent sycophant often gets promoted from the backbenches to the front bench, and some, even luckier, get appointed as Ministers of State or Deputy Ministers. Much, in the political trajectory of Members of Parliament on the Government Benches under the NDC, depends on how they ya-boo and finger point and roll over in Parliament during the reading of the Budget. And even though it is a complete turn off most times, it is a sad fact that I have learned to live with.

It was therefore for me another day in paradise when it happened on Wednesday as the Minister for Finance rolled out the 'deal' that was going to plunge the economy of Ghana further down the abyss of doom than his previous plans did. I was not surprised when Government MPs 'hear- hear(ed)' to every tax increment nor was the excitement with which they welcomed the announcement that the Government was going to continued the net freeze on employment shocking at all.

I was worried however when the Majority with much indecent haste approved the 17.5% Petroleum Tax, the circus had clearly stayed too long in town. Usually when the Minister for Finance gets done with his economic- nothings, some attempt or rather pretense is made by Government MPs to analyze what he has presented, to show they understand it and to rise in support of it. But this time even that was dispensed with.

The Bill the Minister presented on the Petroleum Tax was so ludicrous that the only appropriate response should have been congratulating the Minister for some attempt at standup comedy, reminding him that he was not at a Night of a 1000 laughs and throwing it into the parliamentary trash can. It wasn't just ludicrous that the Minister was asking for more money even though he hadn't properly accounted for the ones already entrusted into his care, it was contemptuous because he was asking for more taxes under a certificate of urgency without telling MPs why or giving them the chance to assess if indeed there was the need to levy those taxes. That Bill should have been met with utter derision. The admission of Government's failure in meeting key targets should have dissuaded anyone tempted to grant them more money through taxation- without proper diligence-. To all honest observers, the term urgency should have been used on Wednesday only in reference to moves to impeach the Finance Minister!

But yet again, the members of the majority showed the entire world the stuff they were made of. They showed that they are extraordinarily petty, partisan, cold and without a shroud of sensitivity or care about the ordinary Ghanaian. That was what they further confirmed when they scorned Ghanaians with their sarcasm by displaying an A4 sheet which read 'Bright Future'. A bright future with dim MPs? NO! NO! NO!

Upon some sober reflection, the more rational ones would realize that their callous display of those sheets was an affront to the dignity of Parliament. But if there is any among them who think they were right, I should think their confusion would be resolved answering these questions:

I just hope when it comes to debating other key aspects of the budget the members on the Government Benches would do more than 'hear hear' everything they heard read and would sacrifice their personal ambitions, put away their selfish follies and at least consider the interest of Ghana.

And for the records, Ghana can have no bright future with dim Government MPs.