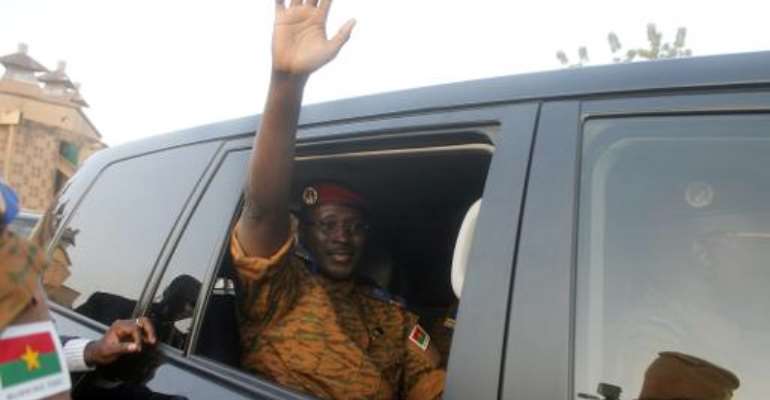 Ouagadougou (AFP) - The race to select Burkina Faso's interim president stretched into Monday as the country sought to choose a new leader ahead of a looming African Union sanctions deadline.

Four candidates -- ranging from a crusading journalist to a former top diplomat -- emerged after tangled negotiations between the army, political parties and civil society groups in the west African nation which is seeking a leader to oversee the transition back to civilian rule after the army seized power when longtime ruler Blaise Compaore was toppled by protests.

"At midnight at the latest, the name of the new president of Burkina Faso will be announced," an army spokesman said Sunday.

But that deadline passed without an announcement and it emerged that interviewing of the candidates only began just before midnight.

An army official told AFP the nomination should occur "Monday at the latest".

The archbishop had himself told French radio last week: "The cleric doesn't engage in this kind of power."

On Sunday, a spokesman for the Catholic Church said "there will be no archbishop among the candidates".

The choices being mulled ranged from journalist Cherif Sy, who founded a weekly that had been bitingly critical of Compaore, former television presenter and journalist Newton Ahmed Barry, former top diplomat Michel Kafando and sociologist and ex-minister Josephine Ouedraogo.

The authorities in the country of 17 million are trying to pick an interim head for a one-year transition period up to elections in November 2015.

Lieutenant Colonel Issac Zida, the army-installed leader, had given the various parties until noon on Sunday to submit names to a panel of 23 mainly civilian electors, who are expected to appoint the interim leader early this week.

The African Union on November 3 issued an ultimatum to Burkina Faso to establish interim institutions and pick an interim president by Monday or face sanctions following Compaore's October 31 ouster and the army takeover.

The electoral college met for the first time early Sunday in the capital Ouagadougou.

The army backs Kafando, who served two stints at the United Nations and was also foreign minister, and Ouedraogo, a sociologist who served as family development minister in the 1980s.

On Saturday, the military reinstated the constitution, suspended when the army filled the vacuum created by the departure of Compaore, who ruled for 27 years after seizing power in a coup.

Religious and traditional authorities have not indicated their preferences.

A "transition charter" -- a sort of interim constitution hammered out between the military and civilian, opposition and religious figures last week -- was officially signed on Sunday by the military.

Applause erupted after Zida initialled the document which marked his acceptance of a return to civilian leadership in the country.

Under the deal, the president will appoint a prime minister, either a civilian or a military figure, who will head a 25-member transitional government.

According to a draft of the transition blueprint, no members of the interim regime will be allowed to stand in the November 2015 election.

Compaore, who seized power in 1987, quit after violent protests sparked by his bid to extend his rule by changing the constitution of the landlocked former French colony.

Election 2020: Only Uniform Personnel Will Be Deployed – Gha...
8 minutes ago