World Bank to give Asanteman $20 million 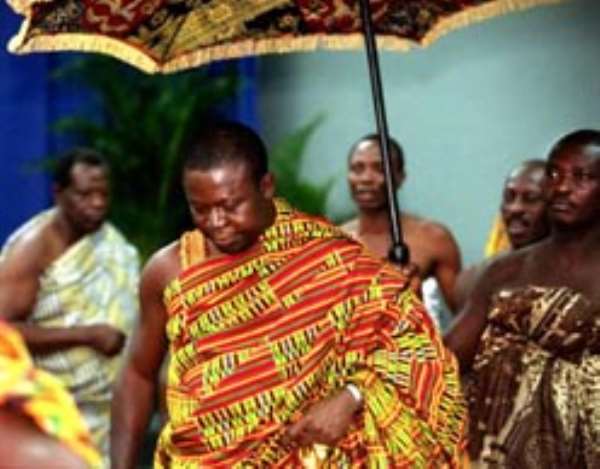 The World Bank would give Asanteman 20 million dollars and technical assistance for a water and sanitation project under the "Asanteman Council's Promoting Partnership with Traditional Authorities Programme" sponsored by the Bank.

More than 500,000 people in 1,000 communities in Asanteman and other parts of Ghana would benefit from the project.

A release from the Ghana Embassy in Washington to Ghana News Agency said the World Bank President, Mr James Wolfensohn announced this in Washington DC on Thursday at a luncheon held in honour of the Asantehene, Otumfuo Osei Tutu II, who is visiting the United Sates as the Special Guest of the Bank's President.

The release said Mr Wolfensohn made the announcement after Senior Officials of the Africa Division and the International Finance Corporation (IFC) of the Bank had listened to the Asantehene's proposal on Water Management and its Potential for Success.

"The proposal is partly based on a very successful case study of community water management system from Asante-Juaben under the leadership of the Juabenhene Nana Otuo Siriboe II."

The release said Mr Wolfensohn also asked the IFC's Principal Investment Officer, Morgan Landy to work with the Ghana Office of the Bank towards the establishment of an Internet Cafe in Kumasi, a Venture Capital and a Plant Pool of heavy machinery.

Otumfuo Osei Tutu had indicated in his proposal that out of a population of 20 million people in Ghana about 7.4 million of them did not have access to potable water and were exposed to poor sanitation.

The Asantehene had also requested for the establishment of the Venture Capital and Plant Pool to enable Ghanaian businessmen to borrow money and hire machinery so that they could compete successfully with international companies for Government contracts because local contractors and businessmen did not have the capital to buy machinery.

The new Vice President of the Bank for Africa, Dr Gobind Nankani and Vice President and Corporate Secretary, Dr W. Paatii Ofosu-Amaah represented the Bank while the Juabenhene Nana Otuo Siriboe; Atipehene, Arnold Prempeh; Media Consultant, Mr Kojo Yankah and a Ghana Embassy Official, Ivor Agyeman-Duah were on the side of Asanteman. Asantehene says he would remain focused on development Accra, July 3, GNA - The Asantehene Otumfuo Osei Tutu II says he would remain focused on bringing development to Asanteman and the whole country in spite of efforts to create artificial rivalry between Asantes and other ethnic groups in the country.

"I am the Asantehene but Ghana is important to me. I am not interested in politics and do not in the least want to be a national king. I am only interested in the development of Asanteman and Ghana as a whole," Otumfuo Osei Tutu said.

A release from the Ghana Embassy in Washington DC to the Ghana News Agency on Saturday said Otumfuo Osei Tutu was speaking to more than 100 Ghanaian professionals, who worked at the World Bank and the International Monetary Fund (IFC) in Washington, DC on Thursday.

"It is the responsibility of chiefs to help the Government to develop Ghana. Politicians can play their Politics but traditional leaders should be interested in development," the Asantehene said. Turning to the 20 million dollars water and sanitation project under the Asanteman Council's Promoting Partnership with Traditional Authorities Programme sponsored by the World Bank, Otumfuo Osei Tutu said although the concession had been given to him and Asanteman, he would spread the benefit to other communities in the Brong Ahafo, Central and Volta Regions, where many communities did not have access to potable water.

The Asantehene, who is in Washington, DC on the personal invitation of World Bank President James Wolfensohn is accompanied by the Juabenhene Nana Otuo Siriboe; the Atiphene, Arnold Prempeh; Mr Kojo Yankah, Media/Marketing Consultant of the Manhyia Palace and Mr Ivor Agyeman-Duah from the Embassy.

The Juabenhene told the Ghanaian professionals working at the citadel of international development that they should always remember Ghana and look into ways of becoming part of its progressive agenda. Nana Otuo Siriboe, who is a member of the Council of State and an Engineer said, "Otumfuo's passion for development has become an obsession and driving traditional leaders in Ghana into action."

The Ghanaian professionals from virtually all the ethnic groups in Ghana were so excited and burst into ovation when the Juabenhene informed them that the covenant between Manhyia Palace and the World Bank was coasting to crescendo with the Otumfuo as special guest of the Wolfensohns and also resident guest at their Washigton, DC and Wyoming homes.

Mr Yankah, former Ashanti Regional Minister and President of the Africa Institute of Journalism in Ghana regaled the Ghanaians with the successes of the Asantehene in the last five years in the areas of culture and community development and concluded that, "within this short period the Asantehene has done so much and has so much to show as proof".

Dr W. Paatii Ofosu-Amaah, one of the top Ghanaian professionals at the Bank, who is Vice President and Corporate Secretary, said culture and especially Asante culture had had influence in the conceptualisation of some of the Bank's social policy formulation, especially the role of women in conflict resolution and social community development.

Dr Ofosu-Amaah described as a rare privilege to have the Asantehene address them and said his development goals were an inspiration to many people working at the Bank.

The Asantehene also visited the National Museum of African Art at the Smithsonian Institution where a memorandum of understanding was reached between Manhyia Palace and the Institution for the Institution to help in the preservation of Asante cultural items and also exchange personnel and programmes.