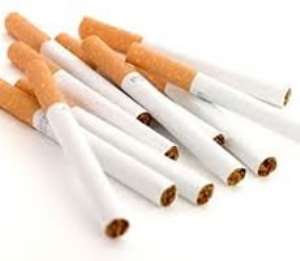 Cigarette business on popular Oxford Street in Osu seems to be booming as retailers make hundreds of cedis a day from sales.

Right from the Dankwa Circle through to Papaye, one can locate several cigarette joints spread along the Oxford Street.

With prices ranging from GHâ‚µ5.00 to about GHâ‚µ85.00 some retailers who spoke to Myjoyonline.com about the venture say they are able to make up to about GHâ‚µ500 a day but make more during weekends.

Rothman King Size cigarette is one of the most preferred brands, according to the retailers

Paul Mall Red
Marlboro
Majority of their customers are foreigners while the others are people who enjoy the buzzing night life in the community.

Built in the midst of century old buildings, the popular Oxford Street in Osu is noted for its many restaurants, cafés and brisk businesses.

There is a joint for Chinese, Italian, Thai and Mexican foods as well as a chain of Casinos. You can find just about anything in Osu.

Speaking to Myjoyonline.com, Grace Osei, who is a retailer and a student at one of the private Universities in the country said she found out that the business was profitable and so decided to engage in it.

She said she uses profits from her sales to pay for her tuition and purchase other educational items and cater for her family.

Another retailer who only gave his name as Kwame said he used to sell sunglasses on the Oxford Street but when he noticed that some of his friends were selling cigarettes and were making money, he decided to join the trade.

He said he is now able to cater for his family, sponsor his children through school and support his wife's business.

Knowing fully well the dangers of excessive smoking, the retailers say it is the only way they make a living and that unless a ban is placed on the sale of cigarettes that is the business they will do.