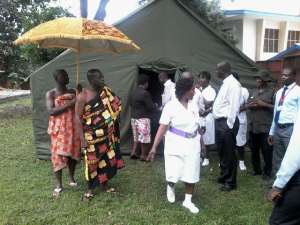 The Komfo Anokye Hospital (KATH)'s gynaecology units are in such deplorable condition that they are unfit to accommodate even animals, in the opinion of the chief of Assin Owirenkyi, Nana Pra Agyensam VI.

A thousand-bed capacity maternity and theatre complex, started forty years ago, has been abandoned while the hospital chokes under dehumanising congestion.

Speaking to LUVNEWS' Erastus Asare Donkor after a donation to the unit, Nana Agyensam decried its deplorable state.

He bemoaned the lack of adequate beds in the facility, which forces expectant mothers to sleep on mattresses on the floor.

“I'm shocked by the conditions. I saw people [lying] on mattresses on the floor and I was told that today is even better.”

Shocked at the conditions, the Omanhene declared that the facility is not even comparable to a veterinary hospital in the West.

He stated that he had spent a summer vacation working in a veterinary hospital during his undergraduate days in England and that the services provided to these animals were far better than those offered to these women.

“I could weep…the condition here, if you put animals in it in some parts of the world, you would go to jail.”

The Omanhene said the state of the unit and the lack of progress on the thousand-bed capacity complex is a blot on the conscience of the country's leaders.

“I leave it to them and their consciences. It's up to those in charge. If they can sleep well, fine.”

The chief was responding to a touching report on congestion at the gynaecology unit. He made a donation of a twenty (20)-bed capacity tent with mosquito netting, which he hopes will help with the decongestion.