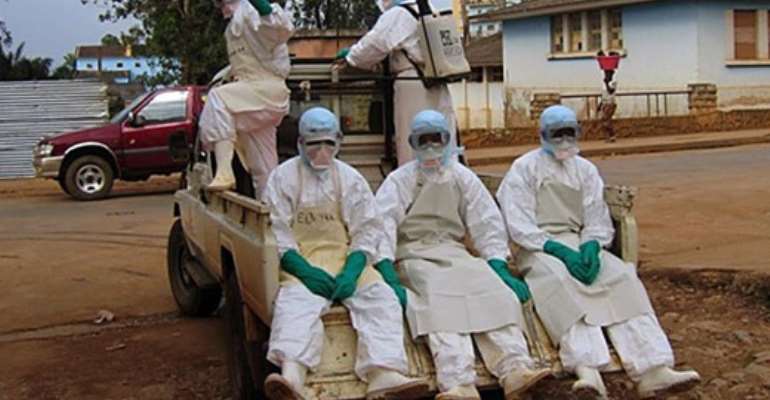 As of today, the Ebola epidemic has killed close to 5000 persons and contaminated 13250. France has been contributing actively to the fight against the epidemic, with a focus on assisting Guinea, while helping other countries in the region to prepare prevention plans.

Overall, French assistance is amounting to 100 million euros, as was detailed by French Ambassador to Ghana, Frédéric Clavier, during the extraordinary Session of the ECOWAS Authority of Heads of State and Government which took place in Accra on 6th November 2014.

France's Action in Guinea
In Guinea, the death toll is currently of 1 050 deaths, out of 1750 cases. The most active outbreaks of the epidemic are still the capital, Conakry, and in Guinéeforestière (forested Guinea) where the organizationMédecins Sans Frontières has been present to combat the epidemic from the onset.

France's plan of action for the fight against Ebola in Guineais structured along five areas: training of medical staff, treatment of infected people, and treatment of contaminated staff, airport safety control, and medical evacuation system.

Three Ebola treatment centers (ETC): the Macenta Ebola Treatment Center in Guinéeforestierewill open by mid-November.It isrun by the Red Cross with the support of Médecins sans Frontières, with the financing and support staff from the French government. Two other treatment centers will be built by the end of the year.

Treatment of healthcare staff: the French military health service will open, by mid-December, a hospital facility to treat Guinean and international health care staff infected by the virus.

Training of healthcare staff: two training centers are being set up in France and in Guinea, by the French Civil Security, for expatriate and local staff. 120 employees of the Civil Security have been deployed to Guinea to assist the Guinean authorities and train the personnel of Guinea's civil protection.

Diagnosis capacity: the French government is supporting the creation of the future Institut Pasteur medical center in Conakry dedicated to the diagnosis and monitoring of hemorrhagic fevers and will also contribute to the training of Guinean biologists in the collaboration with the Institut Pasteur in Dakar and Paris

In addition, France is providing medical and personal protection equipment to Guinea, as well as special food aid, through the World Food Program and is assisting in strengthening health care in the Guinéeforestière region. France is also participating in thestrengthening of controlsat the airport inConakry.

France has been supporting international coordination organizations by seconding experts to UN teams (one expert will be based within UNMEER in Accra) and via an exceptional financial contribution to WHO. It is participating in the funding of institutions involved with combating Ebola like the World Bank, European Commission and the African Development Bank.

France has been instrumental in raising European mobilization, which amounts today to more than 1 billion Euros and is participating in the European mechanism to coordinate medical evacuation and hospitalization of international humanitarian staff. That instrument was a French proposal and is crucial for healthcare personnel to continue working in the field.