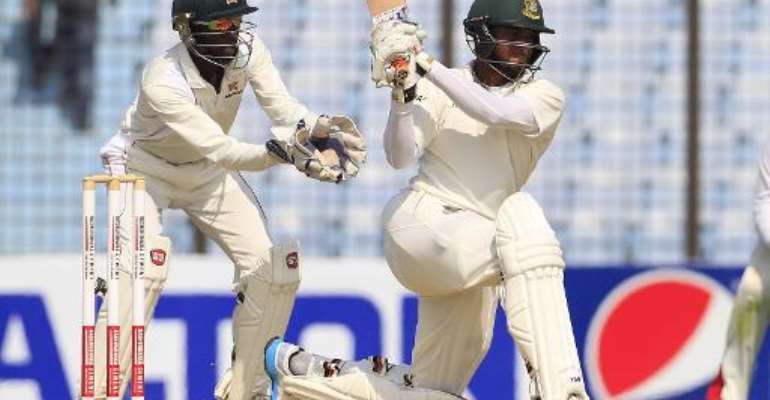 Bangladeshi cricketer Shakib Al Hasan (R) plays a shot as Zimbabwe wicketkeeper Regis Chakabva looks on during the second day of the third Test in Chittagong on November 13, 2014. By (AFP)

Chittagong (Bangladesh) (AFP) - Zimbabwe's top order came good to put up a strong reply to Bangladesh's huge first innings total of 503 on the second day of the third and final Test in Chittagong on Thursday.

Opener Sikandar Raza remained unbeaten on 54 and Hamilton Masakadza was on 51 as the tourists reached 113-1 by stumps, still trailing by 390 runs with nine wickets in hand.

The pair added 104 for the unbroken second wicket after opener Brian Chari was caught behind off Rubel Hossain without scoring.

Rubel had earlier shone with the bat, making an entertaining 45 off 44 balls to help Bangladesh post their highest total against Zimbabwe, surpassing the 488 in Chittagong in 2005.

After nine wickets had fallen for 452 runs, Rubel smashed four sixes and two boundaries during a last-wicket stand of 51 with Jubair Hossain.

Openers Tamim Iqbal (109) and Imrul Kayes (130) had laid the platform for a big total on Wednesday and Shakib Al Hasan led Bangladesh's batting charge on the second day with 71.

Zimbabwe's bowlers prevented a bigger total by claiming eight wickets in the first two sessions after the hosts resumed the day at a commanding 303-2.

Mominul Haque added just two runs to his overnight score of 46 when he was caught in the slips by Brendan Taylor off Tinashe Panyangara.

Shingi Masakadza trapped Mohammad Mahmudullah leg-before for 16 before Bangladesh captain Mushfiqur Rahim dragged a low ball from Hamilton Masakadza on to his stumps after making 15.

The hosts are hoping to sweep the series 3-0 after winning the first two Tests in Dhaka and Khulna.

The Test series between the two lowest-ranked teams will be followed by five one-day internationals.