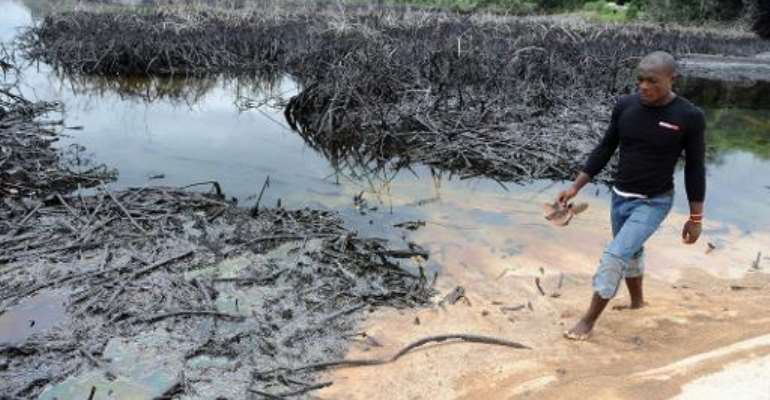 A man walks near spilled crude oil in the waters of the Niger Delta swamps of Bodo, a village in the famous Nigerian oil-producing Ogoniland, which hosts the Shell Petroleum Development Company, on June 24, 2010. By Pius Utomi Ekpei (AFP/File)

The Anglo-Dutch energy giant's Nigerian arm said in a statement that the spills had been greater than the previously-reached total figure of 4,144 barrels.

Lawyers bringing a compensation bid for 15,000 members of Nigeria's Bodo community have in the past claimed the spills could be as large as 600,000 barrels.

Shell did not give a revised figure but a spokesman said the volume would not be a "key issue" in determining compensation.

The compensation case is expected to be heard at the High Court in London next year.

The two sides failed to agree a compensation deal in 2013.

Leigh Day, the legal firm for the Bodo community, says the local environment was devastated by the two spills, depriving thousands of subsistence farmers and fishermen of their livelihoods.

"From the outset, we've accepted responsibility for the two deeply regrettable operational spills in Bodo," said a spokesman for the Shell Petroleum Company of Nigeria (SPDC).

"We want to compensate fairly and quickly those who have been genuinely affected and to clean up all areas where oil has been spilled from our facilities."

He said that following the spills, a team involving government agencies, the SPDC and representatives from the Bodo community visited the sites and completed a joint investigation.

"They estimated that the total volume of oil spilled was in the region of 4,144 barrels," the spokesman said.

"As part of the litigation process, we asked satellite remote sensing experts, hydrologists and specialists in mangrove ecology to assess how the Bodo waterways and mangroves were impacted and other relevant information addressing the question of the volume of these spills and the extent of the damage.

"Having reviewed their findings, we accept that the total volume of oil released as a result of the two operational spills is likely to have exceeded the joint investigation visit estimates."

SPDC was prepared to compensate all members of the Bodo community who have been "genuinely" affected by the spills, the spokesman said.

Decades of spills have caused widespread pollution in the region.

Last year, Leigh Day claimed independent experts had estimated the two spills in the cluster of fishing communities in Rivers state to have been between 500,000 and 600,000 barrels.

They Sent 'Dante Crocodiles' To Our Area To Scarce Us — Ajum...
4 minutes ago

VIDEO: May Ken Agyapong Suffer From Paralysis And Be Numbed ...
23 minutes ago