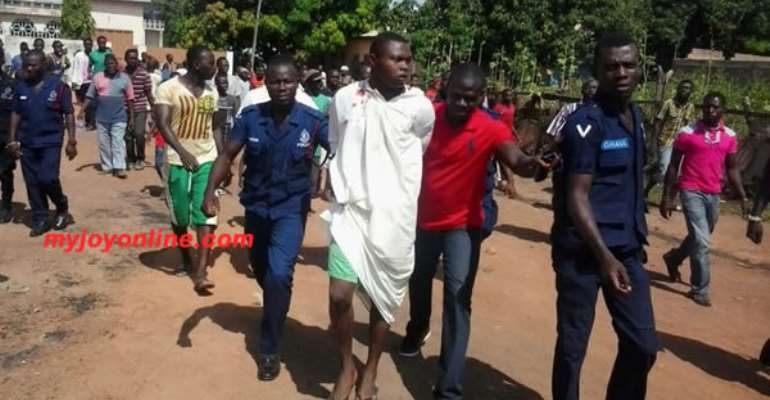 My attention had been drawn to a publication on your website on 7 th November, 2014 on the above caption which you told the whole world that the circuit court judge in Wa, Isaac Akwantey said the circuit court had no jurisdiction to try armed robbery.

I am shocked at the statement attributed to me by your website. I want to put on record that the Joynews correspondent was not in court and that is beyond dispute. The police man who also relayed the information that he purportedly put out there was not in court.

When the court was alerted, we liaised with the High court and it was confirmed and therefore I had no option but to discharge the accused which I did.

A particular policeman had an interest in the case and had initiated the double jeopardy proceedings in courts.

When the accused was discharged this policeman went to tell his superiors what he did not understand and they call[ed] a press conference to distort facts, fabricate untruths and concoct stories as a face saving act.

The Upper West regional crime officer of the Ghana police service, DSP Daniel Kwentwi who threw out the information new painfully that the Wa circuit court has been trying other robbery cases.

DSP Daniel Kwentwi also knew that the accused, Inusah Abdul Rahman was not one of the most deadliest armed robbers in the municipality as he portrayed.

At least the facts of the case are clear. The accused had allegedly the finger of a policeman in the course of arrest but can that singular act make him one of the most deadliest armed robbers in the municipality?

LET ME STATE THAT BY SAYING THAT THE JUDGE SAID THE CIRCUIT COURT HAD NO JURISDICTION TO TRY ARMED ROBBERY, THE IMPRESSION IS BEING CREATED OUT THERE EITHER THE JUDGE DOESN'T KNOW HIS LAW OR THAT HE KNOWS THE POSITION OF THE LAW BUT HAD CLOSED HIS EYES DUE TO SOMETHING ELSE.

This publication is criminal, contemptuous of the court and abused of any broadcasting and journalistic processes.

I demand the immediate retraction of the publication especially when court proceeding were commented on by persons who were not in court or nowhere near the court and who also did not crosschecked from the registrar of the court the information sold out to them.

I am anxiously waiting your full retraction of the report or I will seek redress legally.

Yours
Isaac B. Akwantey
Circuit court judge
Wa
Editor's Note: Everything contained in our original report, which is a subject matter of this rejoinder was based on what the Regional Crimes Officer, DSP Daniel Kwentwi said at a press conference in Wa following the rearrest of the suspect.

We however duly apologise to the Justice Isaac Akwantey for whatever damage the report may have caused him. To the extent that our platform carried the representations of the police officer complained about in the rejoinder.