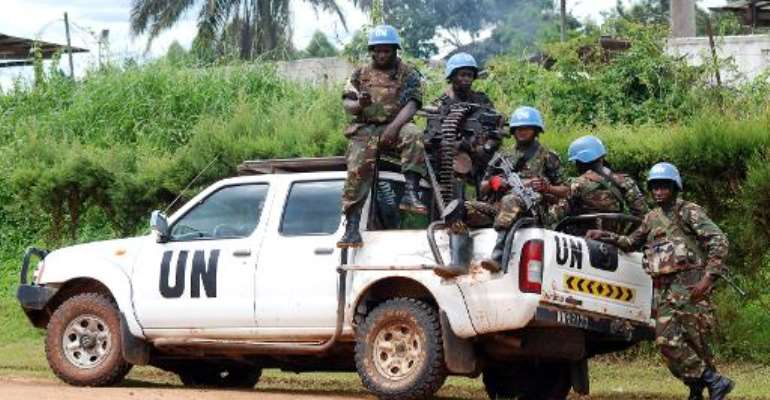 Blue helmet members of MONUSCO sit on the back of a UN pick-up truck on October 23, 2014 in Beni. By Alain Wandimoyi (AFP/File)

Kinshasa (AFP) - A protester was killed and two others badly wounded Tuesday after angry crowds accused UN troops of shooting a man in the head in the troubled east of the Democratic Republic of Congo, rights groups said.

Demonstrators -- some armed with spears, machetes and arrows -- barricaded roads in the town of Mbau after a peacekeeper allegedly shot and killed a man Monday in a dispute over motorbikes blocking the passage of a UN convoy.

Trouble erupted after Tanzanian troops from the UN mission MONUSCO, charged with driving rebels from the strife-torn North Kivu region, "got out of their jeep and fired at close range on a crowd of motorbike riders blocking their passage," a civil society source told AFP.

"A family man was shot in the head and died at the scene," a Congolese army officer said.

In protests Tuesday over the killing, one person died in clashes with police, civil society groups said, with the situation still volatile despite the authorities claiming that calm had returned to the town.

Tensions have been high between the local population and the peacekeepers amid anger at the United Nations' seeming inability to stop a series of massacres by Ugandan rebels in the region, with peacekeepers blamed for killing two youths on October 21 after earlier protests.

The United Nations is already investigating that incident, and MONUSCO spokesman Charles Bambara said it was now looking at the death in Mbau. "We have already opened an inquiry to determine the exact cause of the incident," he told AFP.

The 20,000-strong MONUSCO force is supposed to protect the civilian population of the troubled mineral-rich region which has been prey to armed rebel groups for two decades.

Although it is credited with defeating the Congolese M23 rebel movement, it has been unable to stop a series of recent massacres by rebels of the Allied Democratic Forces and National Army for the Liberation of Uganda (ADF-NALU), who have been hiding out in the region since being driven out of Uganda in the 1990s.