Wasting Breath On A Mundane Issue 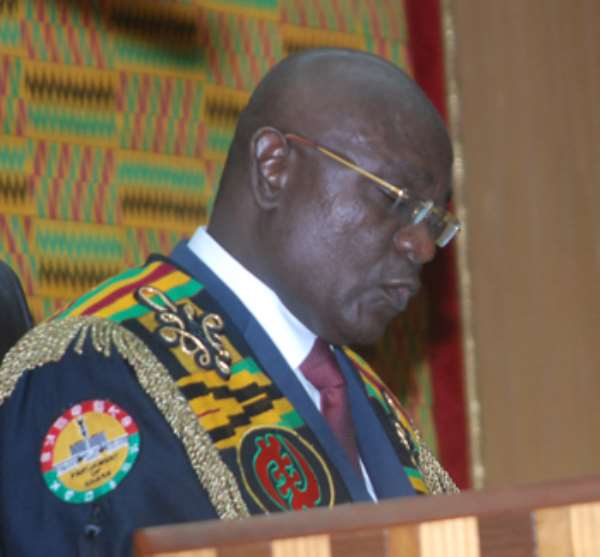 Oaths, pledges and promises are some of the few things I hold dear. Redeeming them speaks volume about one's trustworthiness. Not honouring them, on the other hand, shows how dishonest and untrustworthy one could be. I therefore always do all in my power to redeem each oath, pledge or promise I make.

There was an oath-swearing 'wahala' in Parliament last week when the Speaker declined to take the Presidential Oath. His reason was that he had taken the oath before, so he did not have to repeat the exercise. His action has generated a lot of debate, with some even saying that his action was a threat to our democracy. Others have even gone further to call for his impeachment, claiming his action was tantamount to treason.

What do I think? I think it is a mundane issue which does not merit the ink and airtime being spent on it. Indeed, beyond the symbolism and the ceremonial role of receiving visitors on behalf of the President, there is no substance in the taking of the oath by the Speaker. It's obvious that on assuming office in the absence of the President and his Vice, the Speaker cannot make any serious decision as President. So why all the hullabaloo?

The confusion in Parliament on Wednesday and Friday was avoidable. The Speaker could have saved us all the wahala by simply taking the oath. Obviously, the framers of the Constitution did not see that coming. But oath or not, the Speaker is but a symbolic President.

As I said earlier, I'm one person who values oaths. But in a country where truthfulness and honesty are virtues that are seldom exhibited by the leadership, one cannot be blamed for questioning the significance of oaths, especially presidential ones. The oath-swearing debacle cannot be a threat to our democracy. Rather, lack of candour and the belief in falsehood by the political leadership are the threats to our democracy.

As students in primary and secondary school, our leaders sang the National Anthem and the Pledge every day. They also sing the National Anthem during national occasions. We are told the import of the continuous singing and recitation of the two hymns is to instil patriotism in them. Looking at the shameless and wanton dissipation of public funds going on, one cannot help but wonder if the leadership of this country has learnt anything from the two hymns.

A patriot is one who loves his country and is ready to defend it even at the peril of his life. A patriot is one who will forgo his personal comfort for the good of the country, and not the other way round. A patriot wouldn't eat with both hands after his belly is full, while his compatriots are hungry. Can we in all sincerity say the current leadership of this country is patriotic?

Ours is anything but a country of patriots. If ours had been a country which cherished truth and patriotism, the committee set up by the late Agya Ofuntuo in 2011 to investigate the murky aircraft purchase would have seen the light of day. If the President himself has very serious questions to answer in relation to corruption, what moral right does he have to check his appointees? Is it any wonder that we wake up almost every morning to be greeted by one corruption story after another?

If ours was a country of patriots, the man who orchestrated the 'woyomisation' episode would not be sitting in the House of Honourables as the second in-command. Alas, despite the Supreme Court of the land finding Woyome guilty of looting state funds in the name of judgement debt, the chief architect is comfortably sitting in the House of Honourables shouting 'order and  yeah, yeah! It's sickening, isn't it?

For me, we should not waste our breaths on the Speaker swearing or not swearing a Presidential Oath. We should rather channel our efforts into drumming home the fact that our clueless and compromised government must be up and doing. We should inundate their ears with our anti-corruption songs. That way, they would realise that we can also go the Burkina Faso way.

Lest I forget, Thursday, November 13, marks the 8th anniversary of this column. It seems like yesterday when it all started. Without disputation, the past 96 months have given birth to many interesting events, which made it easier to engage in konkonsa with you. How fast time flies!

I therefore take this opportunity to express my warmest felicitations to Aunty Gina and Fortune Alimi for the opportunity to communicate with you through this medium. I also thank my DAILY GUIDE colleagues for the encouragement. And to you, Abusuapanin and ardent readers of this column, I doff my heart for making me the 'Most Dedicated Disciple of Konkonsa' (Mr MDDK).

Abusuapanin, I needn't tell you that life is hard in Asomdwekrom because I know you are feeling the pinch as well. I, however, would try and celebrate in my own small way. Hope to see you at the champagne-popping ceremony on Thursday. Your favourite kulikuli would be served. Rest assured, there isn't going to be any oath-swearing wahala.

Would be back next week for another interesting konkonsa, Deo volente!