The Electoral Commission Must Redeem Its Credibility 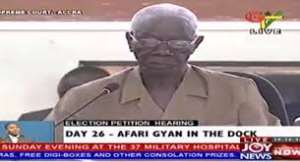 I cannot do justice to this topic without quoting the man who arguably, is the doyen of our modern democracy - he was at the forefront of strengthening and safeguarding our democracy especially after the 2012 general elections, which was stretched at the verge of a near explosion.

In his keynote address for the 3rd Business Law Conference of the Nigerian Bar Association (NBA), which was delivered on Wednesday March 26, 2008, in Abuja, Nigeria, the inimitable Nana Akufo Addo, poignantly stated that the “foundation of business is the existence of strong and independent institutions”. In his view, this will anchor the integration and also bring prosperity to the people of West African.

A year later, President Barack Obama, reiterated similar lines on the reliance of strong men instead of strong institutions, when he stated that “Africa needs strong institutions and not strongmen", a position which has come to remain relevant in our socio-political dictum as the bane of Africa.

The Electoral Commission is an important statutory institution in Ghana, and at the centre of our democratic development. However, the events after the 2012 national elections has created a serious paralysis on its credibility, and further exposed it as a frail institution that is at the mercy of constant manipulation by the powers that be.

It is right to say that, we cannot change the past, but, we can always learn and improve on them going forward. Therefore, the Electoral Commission can no longer continue to ignore the calls of civil society, political parties and other important stake holders to restore its credibility and voters confidence in the electoral process once again.

Calls to have an electoral process devoid of massive electoral irregularities, malpractices, manipulations and violations, which may result from either overt or covert means, which has the tendency of undermining the whole electoral process in any subsequent national elections should not go unheeded.

Even though, the Electoral Commission is supposed to function as an independent institution, it will be in their interest not to operate in isolation or secrecy at the expense of the harmonization that is needed to re-establish their dignity and also in giving true meaning to the fairness and transparency, that is required of them in the discharge of their duties.

It is also imperative that as a matter of priority, they will find it useful to operate an 'open-door' and 'all-inclusive' policy that will see to the immediate implementation of the road map and recommendations that were made by their Lordships, the Justices of the Supreme Court in the infamous Election Petition verdict, and not resort to their usual 'Yentie Obia' policy that has continued to create problems for our electoral process.

Though, the Petitioners in the Election Petition lost their case at the Supreme Court, it was, however, fundamentally established by way of evidences adduced in the court and the written verdict of the Justices of the Supreme Court that the Electoral Commission failed in its responsibilities as the gatekeeper, and allowed illegality to nearly mar the entire electioneering exercise.

Without strong institutions, we risk inviting political-opportunists and power-drunks to take advantage of the flawed system to engage in all sorts of shenanigans and manoeuvrings that may have far-reaching consequences and the propensity to withhold the progress of our nation.

In moving forward, the conduct and posture of the Electoral Commission will determine whether they have genuinely learnt their lessons. One important question I keep asking myself, which I believe many others also do, is that, of what purpose will it serve the Electoral Commission if they keep on violating the laws and regulations that they themselves have set? To what extent will such inconsistency help them to build a strong institution and also to improve on the quality of their performance?

Again, it is trite knowledge that the current Electoral Commissioner, Dr. Kwadwo Afari – Djan. will next year attain his retirement age. The President, acting on the advice of the Council of State shall make an appointment to fill in the vacuum. However, in considering the controversies and the current 'status' of the Electoral Commission, and in the spirit of good faith, the President must follow due process and broadly engage with other important stake holders for the sake of national cohesion, harmony and trust.

The 2016 national elections is an important one that will define the history of our country. It is in our interest to protect the sanctity and gains we have made in our democracy by ensuring that our state institutions work proactively within the scope of the law and not man.

Crucial to this effort, is the work of the Electoral Commission in the various processes and engagements leading to the national elections in 2016 – it is essential and institutionally correct for them to once again redeem their credibility, and with the support of the Ghanaian people, and other stake holders, ensure that we do not either erode our democratic credentials or reverse into the path of destabilization.

The nature, conduct and outcome of our national elections should be one that will be acceptable by all the players involved, in order to hold the nation together for genuine reconciliation, peace, stability and prosperity.