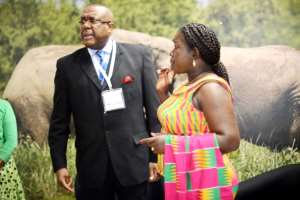 The Minister for Tourism, Culture and Creative Arts, Hon. Elizabeth Ofosu-Adjare has made a strong case for the Ghana tourism industry, calling on the travel agents and tourist across the globe to visit – “the centre of the earth” Ghana.

According to Mrs Ofosu-Adjare, the Ghana tourism industries is growing especially with a renew effort by the government of Ghana to give a special attention to the sector and position the sector as a major foreign exchange earner in Ghana. She said “Ghana has everything to offer, nice hotels, lovely beeches, the largest man-made lake in the world, the most beautiful natural game reserve, castles and forts and above all the nicest people anyone could dream of- the Ghanaian”.

She was speaking to Osibisa Radio, London team during a “Ghana Day” event in London. The minister who was in London with a host of travel and tour operators, hoteliers and other key players in the tourism industry to attend the World Travel Market event also engaged and entertained the guests who visited the Ghanaian stand on hearing the sound bites from traditional drums with some skilful display of dancing moves. Peter, an Australian photographer who could not hold back also started dancing. Describing the event, Peter said “this is just too beautiful, this is fantastic, a scene I never imagined I could ever be treated to”.

Mrs Ofosu-Adjare, said the Sector had, over the years, contributed significantly to the economic growth and development of the nation at the national and local levels, and promoted formal and informal employment opportunities in industries such as hotels, travels and tours, craft villages, music, dance and Ghanaian cuisine.

Touching on the current Ebola crisis is Africa, the Minister said, although Ghana has not recorded even a single case of Ebola, the government has put in place measures to contained and arrest any of such occurrences. She said a treatment and an isolation centre has been built at Tema with two (2) more being constructed at Tamale and Kumasi. Further she said, the government is a adopting a multi-sector approach to intensified public education on Ebola across the length and breadth of the country.

The Minister who also spoke alongside her colleagues from Nigeria, Senegal and other West African Countries at a joint press conference organised on Ebola also said, the government of Ghana has a adopted a very strict boarder security where all passengers are screened carefully before they are allowed into the country. “These measures, the intensive on-going public education, the isolation and treatment centres staffed by well trained doctors, the border security and other on-going efforts by our government, I can confidently say Ghana will remain Ebola Free. I am therefore calling on the tourist out there to visit Ghana because in Ghana, we have a bit of everything West Africa and indeed Africa can offer” she said.

Hon.Ofosu-Adjare also spoke about the strategic role president John Mahama is playing in the fight against the Ebola Virus. She said, Ghana was offered to be used as the logistical centre by the UN and other international community fighting against the Ebola. This she said has provided a vital air-bridge to the affected countries.

The Ghana High Commissioner to the UK, H. E. Amb. Victor Smith and the staff from the Ghana High Commission were also all at the event to grace and support the Ghanaian representative. On his part, Amb. Smith also called on the international community to take advantage of the opportunities Ghana present and invest in the country.