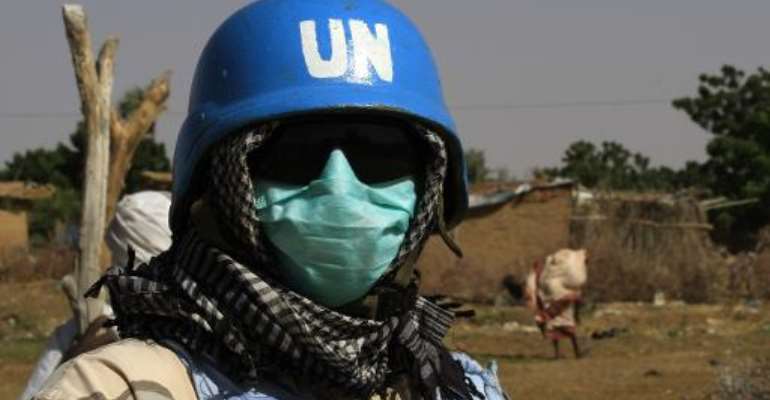 A peacekeeper from the UN-African Union mission to Darfur patrols the Kalma camp for internally displaced people in Sudan's Darfur, on November 6, 2014. By Ashraf Shazly (AFP)

Kalma (Sudan) (AFP) - Intended as a safe haven, a camp housing tens of thousands of people fleeing conflict in Sudan's Darfur region is becoming a virtual prison with armed militias roaming outside.

The dusty streets of Kalma bustle with 163,000 internally displaced persons, but leaving is fraught with danger.

Armed groups wait beyond the perimeter and residents say there are too few UN peacekeepers to protect them, while government security forces guard roads to the nearby state capital Nyala.

By a mud-brick schoolhouse, community representative Sheikh Ali said militias -- whom he claims are armed by the government -- target vulnerable residents.

"If a man goes outside the camp to cultivate the fields or a woman goes to collect wood for cooking, the man will be killed and his property will be stolen and the woman will be raped."

His voice rising in anger, Sheikh Ali, in his 60s, waved his walking stick as he spoke.

Like many of the camp's residents, Ali arrived after Darfur erupted into conflict in 2003.

Ethnic insurgents rebelled against the Arab-dominated government in Khartoum, complaining of being marginalised.

The conflict has killed 300,000 people and displaced two million, according to the United Nations, while inter-communal violence and rising criminality have compounded the situation in recent years.

Kalma's population has ballooned since then, with huts built of tarpaulin, mud and thatch springing up to house the displaced.

The UN humanitarian coordinating agency OCHA says nearly 300,000 people have been newly displaced by "sporadic violence" in Darfur since January.

When militiamen razed the village where he grew up in South Darfur state, Saleh Issa fled to Kalma where he found safety.

The mild-mannered 35-year-old said security deteriorated after several years, but more quickly in recent months because of armed groups.

He said peacekeepers from the UN-African Union mission to Darfur (UNAMID), first deployed in 2007, have struggled to help.

"The UNAMID force inside Kalma is very small," he told AFP. "We need more protection."

UNAMID is made up of nearly 16,000 police and troops, but it is responsible for nearly 500,000 square kilometres of territory.

Its patrols have come under attack by unidentified gunmen, and the government has denied it access to certain areas of Darfur.

Overcrowding has also become a major problem, he said, especially for children.

"We have huge numbers of children in primary schools but the numbers of teachers are very small."

In a tiny classroom made out of mud and thatch nearby, some 60 children jostled for space as one teacher recited lessons to them.

But the acting governor of South Darfur, Abdelrahman al-Hussein, was bullish as he addressed EU ambassadors who visited the region recently.

"I confirm South Darfur state is completely free from the rebels and also free of tribal conflict and we live in security and stability, and all the NGOs are free to move to every place," he said.

Despite the aid groups' work, residents still struggle as chronic insecurity makes leaving the camp difficult for many.

In Kalma's market, Hawa Suleyman sat on the hard earth with a handful of tomatoes for sale on a bag in front of her.

"Our lives were safe when we arrived here" in 2003, she said, her eyes downcast. Her husband and son were killed in a raid on their village outside Nyala and she took her daughters to Kalma.

Mounting security worries mean she can work only inside Kalma, where she has found few customers.

Sudanese security forces have said rebels and weapons are hidden in the camp, which is highly politicised. While they rarely venture inside Kalma, they occasionally raid the camp.

Last week UNAMID said it was "concerned" about reports that security forces were preparing a raid, which the local government denied.

Security forces have imposed stringent checks on displaced people leaving Kalma for Nyala, where Suleyman had hoped to work.

"I tried to look for a job in Nyala town, but when the bus goes from Kalma, it has to stop for searches by the security forces and they ask you many, many questions."

"I tried many times but later I stopped," she said.