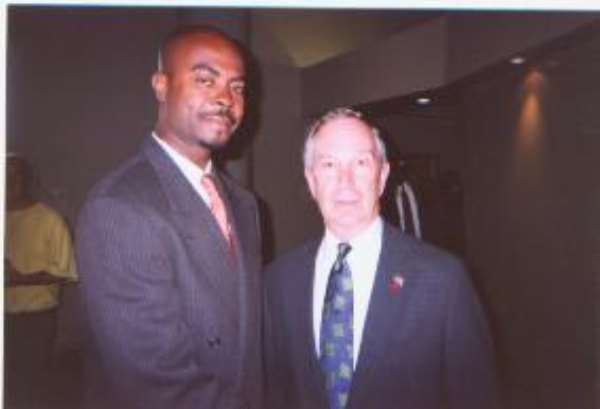 .... TO DISCUSS PLATFORM AND GAIN SUPPORT FROM BUSINESSES AND GOVERNMENT OFFICIALS

New York, NY-- June 30, 2004 Ghanaian Presidential Candidate, Ramon Osei Akoto, who is running as an independent, is in New York City to discuss his campaign's platform with the U.S. business community and government officials. Mr. Akoto's first order of business was to attend a private breakfast for New York City leaders where New York City mayor, Michael R. Bloomberg was the keynote speaker.

Ghana is a stable democratic nation of 20 million people within an area that is the size of the state of Oregon. Akoto's candidacy is historic in that at age 42, he is Ghana's youngest presidential candidate ever and political observers are watching this race, as it is a test of Ghana's democratic principles. The election is December 7, 2004.

Akoto seeks to use a business approach to leadership, thus his administration would be a new wave in governing an African nation. From his 25 years of living in the United States, Akoto knows that it is Ghana's present leaders that are holding the country back from progress. Akoto's bold new leadership will put an end to using 19th Century leadership styles to tackle 21st Century problems. Akoto's years of finding simple solutions to complex problems encountered by American businesses, has clarified for him that most of Ghana's problems can be solved primarily with the proper application of information and communications technologies.

Akoto is the only candidate with a plan detailing concrete solutions. Running as the “Technology Candidate,” Akoto plans to use technology to downsize the government and expand the private sector; to improve literacy through distance learning and other techniques, to strengthen the integrity of energy delivery systems, to increase job creation, to minimize poverty and expand markets for Ghana's products; and to rid the country of corruption, bribery and fraud by making the government's operations and finances transparent to the people. Akoto recognizes that Ghana's problems are not unique and they are not insurmountable. The people of Ghana are ready for change and Akoto enjoys the support of Ghana's largest demographic—young adults.

“I see a clear path for prosperity for Ghana,” said Mr. Akoto. “Information and communications technology can be used in almost every sector to propel Ghana's development. I am here in America to talk about my plan to the international press and to business leaders, particularly to those hardware, software and solar energy companies whose products we will need to implement my plan. My opponents cannot do this, because they really don't have a plan to bring the country into the 21st Century and end the people's suffering and they certainly don't want to answer tough questions.”

Akoto came to the United States to attend college. He graduated from New York University with a master's degree in Interactive Telecommunications and later worked for NYU as a research scientist for the Center for Advanced Technology in Digital Multimedia. Akoto also worked for TDK, MCI, Calvin Klein, Ralph Lauren and others. In 2001, Akoto went home to Ghana to open a school to teach computer technology and was subsequently precluded from accomplishing his task because of an unstable power source and other infrastructure challenges. He had several conversations with the present administration regarding the need to embrace technology to help solve some of the country's problems. However, those discussions were unproductive. Akoto realized that if change is going to happen, he would have to do it himself.