Irish seek to punch above their weight against 'Boks 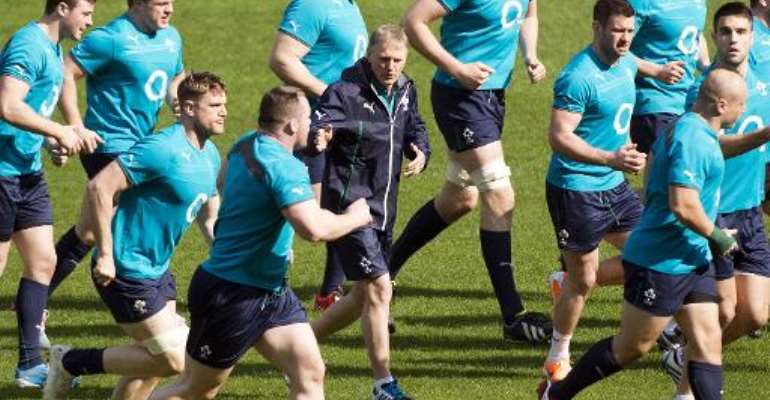 Ireland's head coach Joe Schmidt (C) warms up with his players during captain's run, at Stade de France stadium in Saint-Denis, near Paris, on March 14, 2014. By Lionel Bonaventure (AFP/File)

Dublin (AFP) - Ireland coach Joe Schmidt is looking to his Six Nations champions to land a significant blow on one of what he terms rugby's heavyweights South Africa in their one-off Test on Saturday.

Schmidt, who guided Ireland to a thrilling victory over France to clinch the northern hemisphere title in March, though admits expectations of a repeat of their performance last November when they were seconds away from their first ever win over world champions New Zealand may not be met.

Aside from being deprived of 15 internationals through injury, while iconic centre Brian O'Driscoll has retired, they face the same Springbok side, a mix of youth and experience, that ended the All Blacks 22 match unbeaten run with a thrilling 27-25 win four weeks ago.

Schmidt, who has turned the national team's fortunes round since replacing Declan Kidney after the 2013 Six Nations, has at least got first choice fly-half Jonathan Sexton back fit although outside him will be an all new centre pairing.

Robbie Henshaw, only 21 and with three caps to his name, and New Zealand-born Jared Payne, winning his first cap, have not only been handed the unenviable role of replacing the legendary partnership of O'Driscoll and Gordon D'Arcy but have also been pitched in at the deep end against the 'Boks.

Facing that duo will be the battle-hardened duo of skipper Jean de Villiers, capped 102 times, and Jan Serfontein, the same age as Henshaw but in contrast to his inexperience he has already pulled on the Sprinbgok jersey 16 times.

Schmidt, like Payne a New Zealander, is unabashed at throwing them into such a cauldron, even though the durable D'Arcy had recovered from a heavy knock he took last month.

"One can always pose the question when is this or that player ready to step up. However, unless you give then the opportunity you will never know," said 49-year-old Schmidt.

"This is a really important benchmark game for us and they will be tested.

"We are to use a boxing analogy fighting a weight category above us and I am hoping we can land a punch on the heavyweight."

Schmidt, who on two European Cups in a highly successful spell with Irish province Leinster prior to taking the Ireland job, believes the South Africans are stronger mentally than the All Blacks were last year when the Kiwis came from behind to score a converted try and win 24-22 with the last kick of the game.

"Here you have a team the Springboks who are getting off the plane fresh from the Rugby Championship where they played some spectacular rugby," said Schmidt.

"We got the AB's with one eye on the plane home after a long hard year of test rugby and we caught them on the hop.

"I don't see that happening with the 'Boks."

His South African counterpart Heyneke Meyer, who has had the rare luxury during his 34-test reign of naming the same starting XV as that which played the All Blacks, believes the crux of the game hangs on who emerges the winner out of the duel between Sexton and Springbok 20-year-old fly-half Handre Pollard.

Meyer, though, while it is a big risk in pitting Pollard against such an experienced and wily campaigner as Sexton it is a characteristic of his coaching style.

"I would say I am an unbelievable risk-taker but back home people see me as a dull Afrikaan, stupid, conservative guy!" said Meyer.

"I've always been a risk-taker believe it or not. If it's a 50-50 choice I always go with the youngster who I believe can be superb."