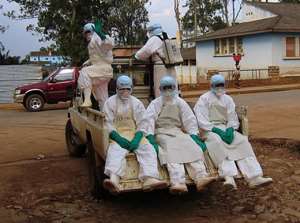 We are on the frontlines of the one of the most deadly communicable diseases ever in human history and we are woefully unprepared. Ebola can completely cripple and sink our fragile public health delivery system.

What is so strikingly shocking to members of the country's medical community is the fact that while the presence of this deadly virus in the West African sub-region has been known for quite sometime now, it was only within the past couple of weeks, or so, that the government announced that it was in receipt of approximately 10,000 PPE (or Personal Protective Equipment) meant for supply to the various hospitals and health centers around the country. According to reports, distribution arrangements had yet to be fully executed.

Whatever the case may be, it is quite obvious that much more needs to be done to speed up the distribution process. And, of course, it is naturally expected that more PPEs will need to be promptly imported into the country by the government. It is sad health workers don't even have the most basic protective gear and information on quarantine and treatment procedures not known. Where do people with symptoms go?

The deadly Ebola virus is still spreading in West Africa particularly in Liberia, Sierra Leone and Guinea. All countries are at risk because of international travel. This disease can spread at the speed of a jet across the world. The case of the Liberian man who traveled with the disease to the United States recently demonstrates how airport surveillance and body temperature checks that depends on the honesty of travelers and diligence of airport health workers alone aren't enough. However, the major advanced countries with robust health infrastructure and public health delivery systems are better equipped to deal with this virus if it surfaces than African countries with our fragile health systems.

West African countries are in the frontline of this deadly outbreak particularly those countries bordering the 3 countries that the outbreak is quite severe. With a fragile public health system ebola can completely cripple and sink the health delivery system of countries in the sub region. West Africa needs help to combat and bring under control this deadly virus. The WHO has estimated that it will need about $1billion USD to fight the disease in West Africa. this is an amount the world must make available else the cost to the global economy will extremely high if there's a global outbreak.

It goes without saying that it is the health of the nation that is at stake and somebody must act swiftly to prevent this health emergency. The Ministry of health must set up a surveillance network and early warning and response system as found within the EU and major advanced countries to upgrade their preparedness for and response to outbreaks of infectious diseases and other public health threats.

In all developed countries, there is a widely shared sense of responsibility to ensure that the health of their citizens are not put at unnecessary risk. Human capital is the most important asset of every nation and it is the duty of the Ministry of Health to promote the health of the people of Ghana through the prevention and control of diseases.

Public health in Ghana today is beset with a number of problems and threatened by many factors and from many sources but there appears to be little or no concern shown by the appropriate departments or ministries of state. We can't even take care of our household waste. Cholera was and is still killing everyday. Filth is engulfing our cities and putting lives at risk. Household waste disposal and medical waste disposal pose a huge health hazard. If we can't handle household waste, how can we protect the health of our citizenry.

Take the case of medical garbage disposal in Accra and many other cities in Ghana for example. Medical garbage calls for a very careful disposal since it could be the source of many infections and a potential carrier of germs. But what do we see? One often finds such garbage thrown into road sides or overflowing from road side garbage containers. Garbage dumps are found located well within densely populated residential areas and are hardly emptied and maintained on timely basis.

Apart from the foul smell, the dumps spread bacteria into their surroundings and becomes a breeding ground for mosquitoes. I see a great need, I see desperate poverty, I see a barrage of problems, health, education, economic, environment etc, etc, but I don't see the government, I don't see the ruling party, I don't the see the opposition parties, I don't see our politicians, I don't see people rolling up their sleeves to work to put things right.

It appears to me that our Public Health departments come into play only when there is an outbreak of some disease. The recent case of cholera outbreak is a case in point. We saw public education adverts on cleanliness after it became a major problem. For ebola, we can wait for an outbreak before scrambling to protect ourselves or try to prevent it. Once one person catches it, all are at risk. Public education, looking out for one another, and a very robust response system, no panic response will help.

An unfortunate aspect of this ebola virus disease outbreak in Liberia, Sierra Leone and Guinea is the violation of the human rights of some of the ebola patients . Some are turned away by hospitals,(well you may argue that the hospitals are ill equipped to handle these cases) they are carried in wheel barrows, (where are the ambulances) and are left at the mercy of their immediate family member who may be an aged mother or grandmother (where are the trained medical personnel). This is where a good health care system with good health care infrastructure can make a difference.

Feature Article
Powered By Modern Ghana
Persistence In Seeking God’s Help
Tarnished Crown: Finding the Thorns of a Gambling Empire
Ascribing Luck To The Position Of A Presidential Candidate On The Ballot Paper: A Much Ado About Nothing
Political Widows!
Akufo-Addo will most likely hand over to Akufo-Addo
On Why Presidents Lose Or Should Lose Elections In Ghana
The NDC Footsoldiers
The World Ruler - Part 21
The World Ruler - Part 20
COVID-19 Updates Live Dashboard
TOP STORIES