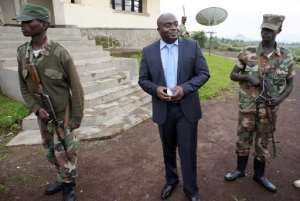 Kampala (AFP) - The leader of the Democratic Republic of Congo's defeated M23 rebels has warned of the possibility of renewed conflict, signalling mounting frustrations among the group's confined-to-camp fighters.

The rebels' 18-month war, during in which they briefly seized the key town of Goma, capital of mineral rich North Kivu province, was brought to an end a year ago by government troops and UN peacekeepers, with fighters fleeing into neighbouring Uganda and Rwanda.

Most of the rebels signed an amnesty deal in May vowing not to fight again, but M23 president Bertrand Bisimwa said that if Kinshasa did not fulfil its side of the deal, he could not "give guarantees for what will happen tomorrow."

"The main causes of this conflict should be dealt with, the causes remain. Today, the security situation in the country has completely deteriorated," he told AFP in an interview in the Ugandan capital Kampala.

"Negative forces continue to plunder the east," he said, complaining that no other rebel force "has been disarmed or stopped."

"They continue to kill. The number of women raped increases each day. The question of refugees has not been resolved. The issue of national reconciliation has simply been forgotten," Bisimwa said.

While the M23 were defeated, multiple armed groups still operate in a region that has been in turmoil for the best part of the past two decades.

Much of the rebel activity consists of abuses against civilians and illegal exploitation of natural resources, be it metals, ivory or timber.

He accused Kinshasa of reneging on its side of a deal, including the release of M23 fighters from prisons in DR Congo -- and that this meant M23 fighters in camps in Uganda were fearful of returning to reestablish the group as a mainstream political party.

With their fighters disarmed and held under guard in camps in Uganda and Rwanda the M23 now hold little if any influence on the ground. The M23 chief, however, implicitly warned his men would fight again should agreements fail.

"When we took up arms, it was when we were forced to do so because to not take up arms would have meant dying. When our people are killed, out of view of the cameras, when our women are raped and our possessions looted, what do you expect us to do? And those that were doing it did so either with the knowledge of the government or its army. What should we have done?" he said.

"We cannot give guarantees of what will happen tomorrow. If the government does not respect its commitments, we regret to tell you that nobody will force us to respect ours," Bisimwa said.

The United Nations and Kinshasa accused both Rwanda and Uganda of actively backing the mainly ethnic-Tutsi M23 rebellion, launched by mutinous soldiers, claims denied by both Kigali and Kampala.

However, more serious transgressions are excluded from the amnesty, including crimes against humanity, torture, sexual violence, child conscription and embezzlement and looting.