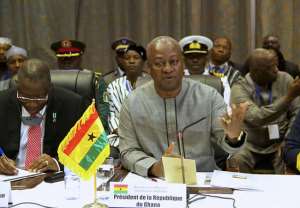 He said what the affected countries need from the international community is global attention and support to fight the disease.

The President, who is also the Chairman of the Economic Community for West African States (ECOWAS), made the statement at the Extraordinary Session of the ECOWAS Authority of Heads of State and Government in Accra, Thursday, November 6, 2014.

“The devastation of this Ebola epidemic does not have to signal an end for these countries. With the attention and the assistance of the world, it could also symbolize the birth of something vibrant and beautiful”.

Nearly 5,000 people have died since the outbreak of the viral disease in March.

The ECOWAS Chair observed “…the effects of Ebola are far-reaching, and there are needs that extend beyond the obvious, needs that are intangible. Needs we must also, somehow, attempt to address.

“Since the start of this epidemic, Liberia alone has registered more than 2000 newly orphaned children; this in a country that was already trying to find ways to provide for the children who had been orphaned during the 14-year civil war”.

Economies of the affected countries will undoubtedly be hit hardest as a result of fear and stigmatisation within the country as well as others from the global community.

“With such large numbers of the labor force unable to work as a result of infection or quarantine measures, the economies of Liberia, Guinea and Sierra Leone have all but crumbled. The crops for this season were not harvested and the crops for coming seasons have not been planted, meaning that the suffering wrought by Ebola will last long after the epidemic has ended," the President noted.

But President Mahama is hopeful the situation could be brought under control if the plans are coordinated and managed properly.

“The contributions that those of us who are gathered here today are making, however minor they may seem, will set in motion a chain of events that will ultimately lead to larger scale changes in the transformation of Liberia, Guinea, Sierra Leone and the entire West African sub-region”.

Ebola Updates
There are currently 13,042 confirmed or suspected cases of the deadly Ebola virus in six countries (including the USA, Spain and Italy), according to the World Health Organization. But the group says its latest figures also hold some good news, as the number of Ebola cases in hard-hit Liberia appear to be on the decline.

WHO released its data on Wednesday for the period of the outbreak up to November 2, 2014, saying that Ebola has now been blamed for 4,818 reported deaths.

The group said that the weekly incidence of Ebola seems to be stable in Guinea, rising in Sierra Leone, and declining in Liberia — continuing a trend that prompted a recent post by NPR's Goats and Soda blog.