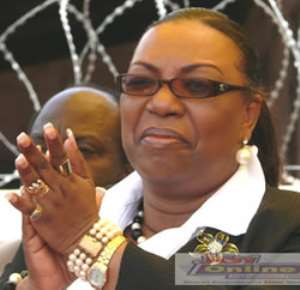 Betty Mould Iddrisu
The Commission of Enquiry investigating the payment of judgement debts will finally conclude its public sittings today, Thursday, without the appearance of the main architects of judgment debt payments.

Sole Commissioner Justice Yaw Apau of the Court of Appeal announced that they were retiring to the chambers to prepare their report but did not indicate when they would submit the final report to President Mahama.

From all indications, former ministers under whose tenure most of the 'dubious' and 'frivolous' judgment debts were paid might not be called to give testimonies about how the 'monster' called judgement debt suddenly gained root in Ghana's political lexicon.

The two ministers on the lips of the public as having supervised some of the alleged payments that somewhat triggered the setting up of the commission by President Mahama are former Attorney-General and Minister of Justice, Betty Mould Iddrisu and her deputy, Ebo Barton-Odro, now Deputy Speaker of Parliament.

Mandate
The commission derived its powers from C.I. 79 to investigate the frivolous and dubious payments of huge monies to undeserving individuals and companies after public uproar over the payments in what has now come to be termed Judgement Debts (JDs).

Notable among them were payments made to CP (â‚¬94 million) and the never-ending case of GH¢51.2 million parted to the self-styled National Democratic Congress (NDC) financier, Alfred Agbesi Woyome.

Big Fishes
It was expected that some public officials, under whose tenure some of the questionable payments were made, would be brought to the commission to give testimonies but that might not happen.

Mrs Mould-Iddrisu and Mr Barton-Odro have been subjected to public criticisms for allegedly approving dodgy payments in the name of judgement debts to individuals and organisations. Alfred Agbesi Woyome particularly had admitted that he had no contract with the State.

With the State having turned round to prosecute Woyome, the Sole Commissioner was expected to call at least Betty Mould-Iddrisu, who is now gunning for the NDC vice chairmanship position, to throw light on the dodgy payments.

Amidu Chases Betty
On September 25, 2014 Mrs Mould-Iddrisu's predecessor, Martin A.K. Amidu, petitioned the Sole Commissioner to determine whether it was lawful for his successor to decide a settlement with Yakubu Kasule, owner of Gbewaa Civil Engineering Limited, in a case against the government.

Mr Amidu insisted that it was irregular for an Attorney-General to enter into terms of settlement with Yakubu Kasule and his company when all the cases involved were not consolidated before the action.

The terms of settlement had been signed by Yakubu Kasule and endorsed by his solicitors, Fosu-Gyeabuor & Co, as well as the then Deputy Attorney-General, Ebo Barton-Odro, on October 29, 2010.

Barton-Odro's Action
Barton-Odro
On June10, 2014, another witness testified at the commission that Mr Barton-Odro unilaterally raised the cost of the Asafo Market interchange in Kumasi for the contractor who had executed the project.

According to David Kwabena Ofosu-Dorte of AB & David Law, Mr Barton-Odro, who was the chairman of a dispute panel on the project, increased the debt owed by the government to Sarroch Grandulati/Gelfi Joint Venture to GH¢3.4 million instead of the agreed GH¢3.180 million.

Mr Ofosu-Dorte, who has in-depth knowledge in construction and engineering laws, testified on behalf of AB & David Law, lead counsel for the government on the project.

He had told the commission that when dispute arose between government and the contractors over the cost, Mr Barton-Odro decided to call a caucus meeting to resolve the issue. Testifying,  Ofosu-Dorte said 'The time we were hit by the GH¢3.180 million he (Barton-Odro) called a caucus and asked if we could do anything about it and we said he is the chair and he represents the government and whatever he thinks he can do about it he could tell us.

He continued, 'Even at that time I asked that what if we are called tomorrow, how do I explain how we arrived at GH¢3.4 million when everything showed it should have been GH¢3.180 million? The attachments clearly do not show GH¢3.4 million,' adding, 'full settlement report was dated October 22, 2010 and the amount increased from GH¢3.180 to GH¢3.4 million because it was imposed by the chair (Barton-Odro).'

More Petitions
Justice Apau said although the petitions—some of which 'stink'—were still flooding in, 'There will be no more public sittings…we will use the remaining weeks to prepare our final report.'

The commission, set up by President John Mahama in September 2012, was supposed to use a year to investigate the payment of judgement debts from 1992 to 2012, but ended up spending about two years to conclude its work.

It commenced preparatory works on October 8, 2012 before starting full public sittings on November 28, 2012 and had a period of 12 months (around November 2013) to submit its report.

However, due to the fire accident that rendered the Old Parliament House in Accra—where the commission conducted proceedings—uninhabitable, the President gave the Sole Commissioner an extension of time.

What Will The Publication Of 260-Page Cocoa Road Audit Repor...
11 minutes ago