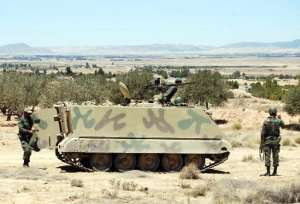 Tunis (AFP) - A Tunisian soldier wounded in an ambush blamed on jihadists has died of his injuries, raising to five the number of troops killed in the attack, a government official said Wednesday.

"The toll is (now) five dead and seven wounded" from Tuesday's ambush in the Kasserine region where the army is battling jihadists, government secretary general Ahmed Zarrouk told AFP.

He said the troops came under fire with rocket-propelled grenades and automatic weapons near the town of Sbeitla.

Kasserine lies close to the border with Algeria at the foot of Mount Chaambi, where security forces have since 2012 been hunting down jihadists blamed for attacks that have killed dozens of police and soldiers.

Authorities have blamed the main armed group active in the area, the Al-Qaeda-linked Okba Ibn Nafaa Brigade, for a series of attacks including last month's massacre at the national museum in Tunis that left 21 foreign tourists and a policeman dead.

Tunisian security forces said last month they had killed the alleged mastermind of the attack -- Lokmane Abou Sakhr -- along with at least eight other members of the group.

Tunisia has seen an upsurge in Islamic extremism since longtime strongman Zine El Abidine Ben Ali was overthrown in a 2011 revolution.