Opoku Gakpo writes: Are our soldiers the wisest people in Africa? 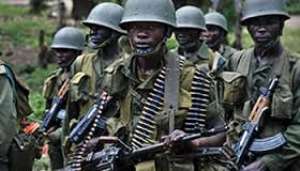 “It may take a long time, but with patience, even a really serious and persistent problem will eventually go away by itself. That is, all problems resolve themselves, given time….” This quote from the book: “The Mafia Manager” summarizes the story of how President Blaise Compaore's 27 year rule in Burkina Faso ended recently with just a small show of the people's power, after just two days of street protests.

The signs were clear on the wall that the people were tired of him; signals I'm sure he saw himself. But the motivation to step down was absent. Compaore was overly drunk with delusion, belly - filled with greed, drenched in viciousness and buried in fantasy.

Just like the several other self-seeking 'soldiers turned head of states' on the continent who have fallen before him. Including, Captain Thomas Sankara who ruled Burkina Faso for five years, Field Marshal Idi Amin Dada who ruled Uganda for eight years, Colonel Muammar al-Gadaffi who ruled Libya for 34 years, and General Gnassingbé Eyadéma who ruled Togo for 38 years.

Not forgetting their compatriots who continue to cling onto power using weapons of high handedness against their citizenry and the suppression of dissenting views. I speak of: Lieutenant Yahya Jammeh who has ruled Gambia for 20 years, Yoweri Museveni of Uganda who has ruled that country for 26 years, Lieutenant Teodoro Obiang Nguema Mbasogo of Equatorial Guinea who has led that nation for the past 35 years, Omar al - Bashir who has been leader of South Sudan for the last 21 years, and General Iddris Derby who has ruled Chad for 24 years, among others.

There is one thing we are all certain of. Their time of fall will come soon. Because the principle that: 'human beings are not pets, and can hardly remain loyal to one master for a very long time' applies in these nations too. Even if you feed them with milk and honey on daily basis, one day they will get fed up, and throw up. And the target of the vomit will be the face of their master.

The ground swell against democratic dictatorship on the continent is growing, and the boldness to step out and challenge authority on the streets is spreading wild and fast. It's just a matter of time.

These military guys ride on the back of claims of poor governance in their countries - real and perceived, and take advantage of public disenchantment over difficult economic times to engineer revolutions and coup d'états against sitting presidents. These overthrows thrive on pervasiveness of corruption among the governing class, as well as affluent and wasteful life styles of public officers who consume the resources of state as if no one else matters.

But what at all makes these military guys believe that any time an African nation is in crisis and the people want their incumbent leaders out, they have the right to step in and seize control of government machinery, dissolve parliaments, declare constitutions null and void, and establish themselves as lifelong rulers? Who told them they are the wisest men on our continent and have the right to arrogate to themselves, 'savior status' when their countries are in difficult times? Who do they think they are, by the way? Demi - gods?

And they decide to hold onto power till death does them and the presidential seat part, using an age old trick: Serve as military head of state in a transitional administration for some time, remove the uniform, establish a political party and organize shabby elections to legitimize your continuous stay in power.

Military impunity
In the most annoying example we have seen in recent times, Egyptians poured onto the streets in a revolt that ousted the 30 year rule of military dictator, Hosni Mubarack. A free and fair election was held that saw Mohammed Morsi of the Muslim Brotherhood emerge as winner. One year into his administration, there was another mass mobilization on the streets demanding his head for failing to deal with the economic hardship facing the country. Military chief Abdel Fattah Al Sisi stepped in, ousts President Morsi, and declares himself interim head of state.

Shamelessly, he holds on to power, makes a wild claim the people are calling on him to run for president, removes the uniform and goes ahead to run as president and take over as leader. How awful. Taking a cue from all the other military leaders I mentioned earlier.

But why should this be happening in Africa when in Britain, Portugal, Greece and other Western countries, leaders have been removed in recent years before the end of their tenure over similar concerns of mismanagement but we did not see the military intervene?

This popular quote of Barack Obama explains it: “Africa needs strong institutions, not strong me.” Because our institutions remain weak, the military guys who believe they are the strong men tend to feel without them in charge, Africa will collapse.

The disheartening part is that most of these military guys jump into politics for their personal benefits, and not in the national interest as they always tout. With the sole aim to make themselves and their friends better off.

To improve upon the quality of the whisky they sip during their relaxation periods, make it possible for them to operate from air condition offices instead of the heat filled battle grounds, and fatten their bank accounts, leaving the rest of us down the ladder. The principle they operate with is as follows: If you think and act solely for your own benefit, you will reach the top.

That is why I am extremely happy with the posture the people of Burkina Faso have adopted after the fall of the Compaore administration. That they will continue demonstrating and insisting the revolution is not over until the military hands over interim transitional powers to a civilian.

The civilian rulers are definitely not angels, but the soldiers have shown us over the years they also never practice the transparency and accountability they promise during their self installation as leaders.

What is also factual is that the soldiers' place is the barracks not the presidential palace, for crying out loud. And African soldiers must stop poking their noses where they don't belong.

The even more sad part of the story is that; these military guys who come to power on the back of claims they are for the people, are the ones who supervise the most widespread human right abuses on the continent. Executing people, particularly political opponents and predecessors without recourse to rule of law, causing the disappearance of critics, jailing persons who express the slightest disagreement with how they run the nation, among others. Take General Idi Ami for example, under whose watch between 1971 and 1979, the military is estimated to have been responsible for the extra judicial killing of more than 100,000 people.

Personnel in the Armed Forces remain the most powerful group of professionals in any country. That is why in any civilized state, civilian authority must always exercise tight control over military might; otherwise impunity grows.

By virtue of their sheer power, allowing the military too much operating space in a country leads to the creation of a rogue state that threatens the peace of both citizens and the international community.

Looking forward
Next year, more than one third of countries in Sub Saharan Africa will clock 55 years post-independence. If the continent was a human being, he or she will be nearing retirement.

After half a century of poverty, hopelessness, wretchedness and in most African nations, accelerating retrogression, it's time we begun some proper re - building on our continent. It's time we put an end to the unending struggles for power, and focus on empowering the ordinary citizenry to be able to feed, clothe, shelter and educate themselves.

It's time leadership begins focusing more on how to create jobs and wealth for Africans, and less on how to keep their jobs as political leaders through fair or foul means. We've been left behind for too long, and it's time to make some real progress now.

May God bless our soldiers in Africa and give them wisdom that encourages them to use the power they wield more wisely and prudently. I'm convinced this is the only way they can continue to keep themselves relevant in the scheme of governance on our continent.