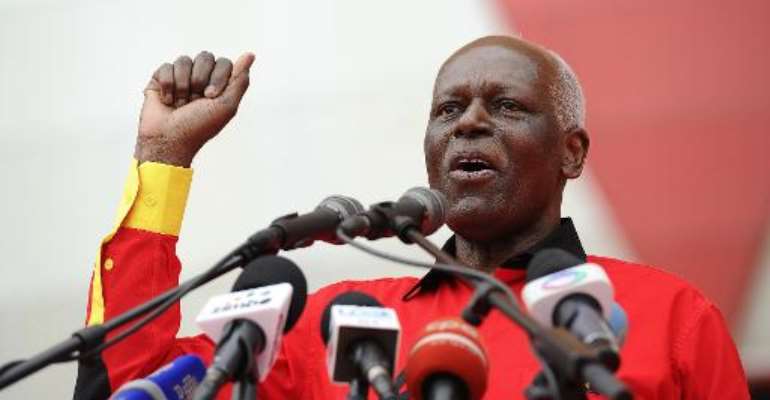 Johannesburg (AFP) - Angola's long-ruling president should learn from the ousting of his counterpart in Burkina Faso and make plans to step down rather than be forced out, the country's most prominent activist has told AFP.

Jose Eduardo dos Santos is the continent's second longest serving president -- after Equatorial Guinea's Teodoro Obiang Nguema -- having led the oil-rich country for the past 35 years.

There are no signs of the Angola leader relinquishing power anytime soon.

"I think the plan of President Dos Santos is to stay in power until God calls him and then if possible for his son to take over," author, rights and anti-graft activist Rafael Marques de Morais told AFP during a visit to South Africa.

"It's up to society to help him to be aware that if he does not heed the call for change and doesn't realise that he has been too long in power, they can also remove him by popular uprising.

"No one expected the Burkinabes to rise and if the Angolans rise, no one will be expecting that to happen," said Marques.

News that Burkina Faso's long-serving leader Blaise Compaore had been booted out amid mass protests last week after 27 years in power, has reverberated across Africa.

Nine leaders across the continent, including Dos Santos, have held power for more than 20 years.

"This is the opportunity that the president has to reach out to other sectors of society and make a plan for transition, rather than being pushed out by force and humiliated after so many years in power," said Marques.

"What happened in Burkina Faso, you cannot call it undemocratic, people got fed up. And people can get fed up in Angola as well because the president is ruling above the law."

Marques, a 43-year-old Oxford educated activist and journalist, has been arrested and detained several times for exposing corruption.

He has written a book entitled "Blood Diamonds: Torture and Corruption in Angola" and runs an anti-corruption watchdog, Maka Angola.

The generals are suing him for $1.2 million in damages and also want him jailed.

But Marques believes the Angolan government in some ways finds it useful to keep him around.

"Members of the regime are not shy about saying in public that the fact that I am alive, and still doing my work, is evidence of democracy in Angola and the magnanimity of our president."

Thanks to a long civil war that killed hundreds of thousands, Angola had become a by-word for brutal internecine conflict.

The government has been trying to polish its image of late, lobbying hard for a non-permanent spot on the United Nations Security Council and taking part in multinational peacekeeping missions.

But Dos Santos remains vulnerable to accusations of authoritarianism at home, where the vast majority of people live in poverty despite massive oil wealth.

A majority of Angola's 24 million inhabitants struggle to access basic necessities such as water, electricity, health and education.

"People mean nothing to them except when there is pressure for legitimacy, and then they rig the vote," Marques said.

Marques says he has evidence Angolan elites are acquiring vast tracts of land by exploiting the weakness of land rights in Angola, as in much of Africa.

"There is land grabbing, leaving tens of thousands of peasants without land for subsistence farming," he said.

That is "reason enough for people to rise and say enough is enough."

Marques said Luanda's repeated use of force to crush small peaceful protests was a sign it was scared of change.

"One testament that the government is so fearful is that it doesn't allow 15 young people to demonstrate against the president, it will send hundreds of police officers to tame them.

"Now the day you have thousands of people on the streets, the regime will fall."

As in many African countries, the media in Angola has come under the grip of the administration, he claimed.

"What existed of independent media is now under the control of proxies of the regime."

Odododiodoo: ‘Impotent’ Police Cause Of Constant Clashes – ...
4 minutes ago