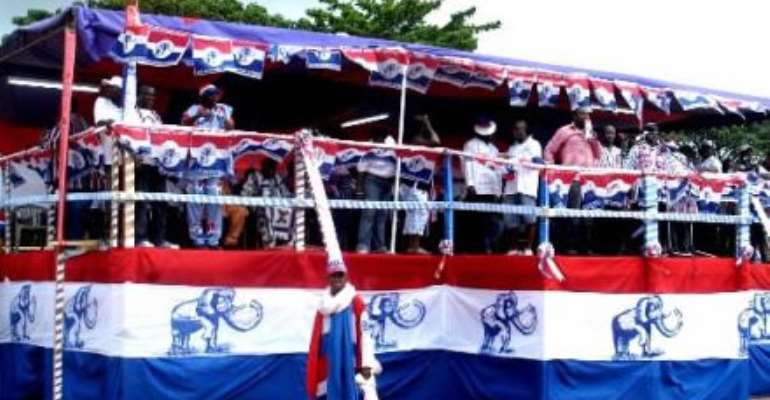 Going by the political history of Ghana, the fact still remains that no sitting president has lost presidential elections against a competitor he had previously beaten. This fact is supported by the successful completion of two 4-year terms by former presidents Rawlings and Kufuor respectively. The untimely demise of Prof. Mills therefore paves way for president Mahama to follow the footsteps of his predecessors.

In his bid to make this dream materialized, president Mahana has engaged the services of some chiefs in the Northern part of Ghana. Intelligence picked from the North indicates that, series of meetings are being organised to sensitize the people in the North on this agendum. The message going round in the North is that, if an Ewe (Rawlings) and Asante (Kufuor) could be given 8 years to rule Ghana, then it is equally important for a Gonja (Mahama) to also serve 8 years at the presidency. Prez Mahama is again motivated by the fact that serving two terms at the presidency would automatically set a new record for the NDC as the only party to have been in office for 3 consecutive terms (12 years).

Putting the above aside, Election 2016 presents a perfect opportunity for either Mahama to prove his innocence of the 2012 'Stolen Verdict', or for the petitioners - Nana Addo et al to be vindicated as the true winner. This challenge could further push Mahama to maximise incumbency to his advantage in Election 2016. And those who know Prez Mahama as the Candidate to have used only 3 months to chalk one-touch victory in 2012 would not be surprised at all, should this happen.

It must also be noted that in Ghana, incumbent governments lose power every 8 years. However, this occurs only when the incumbent government/party presents new Presidential Candidate, and only through run-offs. For instance, in 2000 and 2008, the NDC lost power with a new Candidate, Prof. Mills. Similarly, in 2008, the NPP lost power with a new Candidate, Nana Akufo-Addo. From the above, it can be concluded that, if a change of government is to be expected in Election 2016, then it is likely to be through a run-off, other things equal. But, has the NPP leadership incorporated this in its scheme of things, in terms of the party's relationship with other opposition parties?

What then could be the NPP's chances in Election 2016? Currently, many NDC fanatics, like other Ghanaians, are not enthused about Mahama's performance, but could such peevish be sustained till 2016? Gradually, Prez Mahama is gaining confidence and getting recognition from the Western World. Besides, flagship projects like the Nkrumah Interchange, Tamale International Airport, etc are being undertaken, and would be unveiled during the Election year. Whilst the currency (Cedi) is being stabilized, the producer price of cocoa has been increased for farmers.

The above stated facts therefore make the NPP's quest to win 2016 more herculean a task. Therefore, any form of complacency must not be entertained, if the party is serious at winning Election 2016. The overwhelming victory of Nana Addo in the recently-held NPP primaries was good, but was it the first time Nana Addo had been handed that favour by the party's delegates? At best, bitter experiences in 2008 (ruling party) and 2012 must guide us in the next election. Whilst I agree that party unity is a pre-requisite for victory, the NPP's numerical strength alone cannot, and will not guarantee electoral victory for Nana Addo.

Going forward, I expect each member of the NPP to identify at least, one shortfall of the party/candidate and work towards its improvement. Mine is the formation of FV '16 (Floating Voters for NPP in 2016) to woo all floating voters to our side. FV '16 will also educate voters on the proper way of voting in order to minimize the number of rejected ballots. The NPP leadership should also work on attitudinal and perceptional change, universal campaign message, and more importantly strategic communication. Raining insults on the Electoral Commission, which happens to be the 'referee' of the political game, and the president, who is 'admired' by people from his home region will never give the NPP extra votes. Our actions and utterances should bring new voters on board on daily basis, but not to provoke and drive them away. In this technological world, the NPP does not need to wait for 24 hours before the party collates figures and knows the results.

If the above suggestions are given priority attention, victory would be ours, and the NPP's dream of creating a society of equal opportunities for all under the 'presidency' of Nana Akufo-Addo would not be a mirage.

Feature Article
Powered By Modern Ghana
Is Bagbin still standing by his corruption tag on Mahama?
From 2021 Should Parliament Aim To Make Ghana Africa's First No-Go-Territory For Ruthless-And-Exploitative-Employers?
Sperm To Dust: Life As Is Vrs As We Want It To Be
A Quick Note To Valarie Wood-Gaiger, OBE - Founder Of Grandma International
US Meddling In The Affairs Of The River Nile Basin: The AU Must Act!!!
NPP has gotten themselves more confused
Impunity and Carefree Violence: Australia’s Special Forces in Afghanistan
Nigeria's Problems Are Deeper Than SARS
Are Akufo-Addo's Daughters More Ghanaian than John Mahama's Wife?
COVID-19 Updates Live Dashboard
TOP STORIES