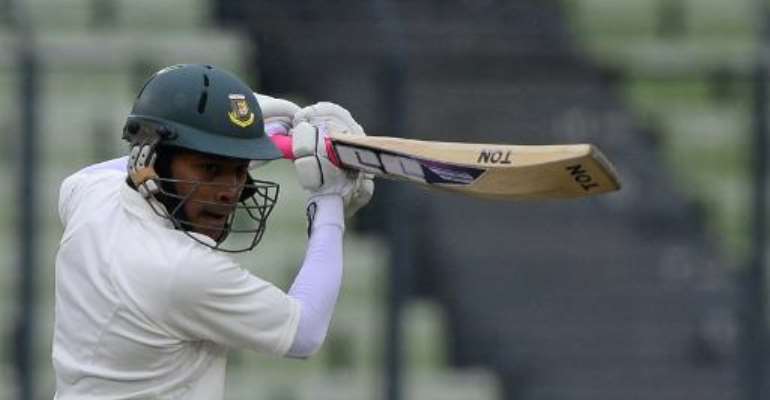 Bangladeshi cricket captain Mushfiqur Rahim plays a shot during the third day of their first Test match against Zimbabwe, at the Sher-e Bangla National Stadium in Dhaka, on October 27, 2014. By Munir Uz Zaman (AFP/File)

Khulna (Bangladesh) (AFP) - Bangladesh captain Mushfiqur Rahim warned of a backlash from Zimbabwe in the second Test in Khulna from Monday as his side hunt for only their third series win in Test cricket.

The hosts have the lead in the three-match series following a tense three-wicket win in the opening Test in Dhaka when they struggled to surpass a modest target of 101 on the spin-friendly wicket.

It was only the fifth win in 86 matches for Bangladesh since earning Test status in 2000 and the second on home soil after the 226-run win against the same opponents in Chittagong in 2005.

Bangladesh's two series victories so far were the 1-0 win against Zimbabwe at home in 2005 and a 2-0 success over a boycott-hit West Indies in the Caribbean in 2009.

Rahim said his team could not afford to take victory for granted despite playing on what is expected to be another slow pitch.

"The last Test ended in three days, but if we expect the same to happen here it will be a mistake," the captain said.

"I think they (Zimbabwe) are better prepared. In the last Test, they had only 101 runs to defend and yet gave us a good fight."

Rahim sought an improved batting display to gain the upper hand in the contest between the two lowest-ranked teams in Test cricket -- Zimbabwe at number nine and Bangladesh at 10.

"In a Test match, one usually sees only a couple of soft dismissals, but in our case there were about five or six in Dhaka which is alarming," he said.

"We need to concentrate better and focus on our batting in a way that if someone gets a 50, he should go on to make another 50. The team benefits when a batsman gets a 100."

Bangladesh have included batsman Anamul Haque in their squad to replace seamer Al-Amin Hossain, who opted out of the game to write his university exams.

Zimbabwe are sweating over the fitness of experienced batsman Craig Ervine, who was hurt on the right hand by a rising ball from team-mate Tendai Chatara during training on Saturday.

Zimbabwe coach Stephen Mangongo was confident of a better display by the tourists in Khulna.

"The first Test was close and we have prepared hard for the second game," he said. "We are determined to level the series here."

I Felt Very Safe Under Mahama – Manasseh
44 minutes ago