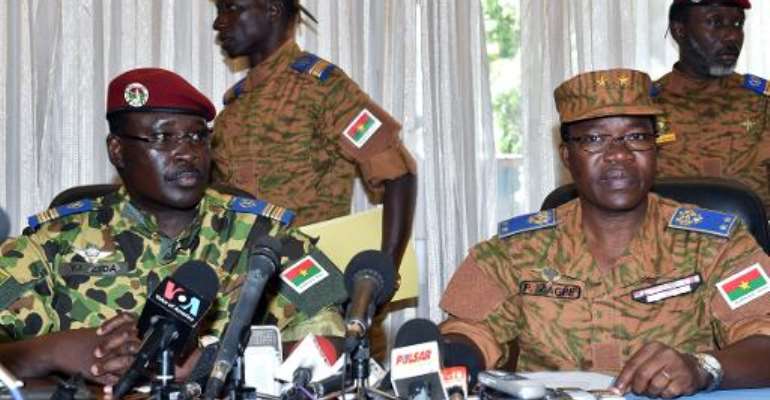 Compaore resigned Friday after unrest over plans to extend his 27-year rule exploded into violence that saw parliament set ablaze, in protests closely watched across a continent where other veteran heads of state are also trying to cling to power.

Zida, who beat out a rival claim by the west African nation's army chief to fill the power vacuum, vowed to work closely with civil society.

The transition will be carried out "together with the other components of national life," he said, referring to the political opposition and civil leaders.

The army's endorsement was signed by General Nabere Honore Traore, who initially said he would himself assume power, a claim Zida had dismissed as "obsolete".

Zida, the second in command of the presidential guard, said Friday he had assumed "the responsibilities of head of the transition and of head of state" to ensure a "smooth democratic transition".

"The aspirations for democratic change" of the Burkina youth "will be neither betrayed, nor disappointed", he said.

Speaking on television early Saturday, Zida said the ousted president was "in a safe place" and his "safety and well-being are assured".

In neighbouring Ivory Coast the presidency confirmed reports that Compaore, who left Ouagadougou on Friday according to French diplomats, was in the country.

A local resident said he saw a cortege of around 30 cars heading for a luxury hotel in the Ivorian capital, which is also used as a semi-official residence for foreign dignitaries.

"The services of the President hotel in Yamoussoukro served him (Compaore) dinner yesterday (Friday) and breakfast this morning (Saturday)," according to a hotel employee.

In the Burkina Faso capital, calm returned to the streets, with shops reopening and calls by protest organisers for a clean-up of the debris left behind after violent mass protests.

The uprising, which has drawn parallels with the Arab Spring, was sparked by plans to change the constitution to allow Compaore to stand once again for elections next year.

Despite dramatic protests which drew tens of thousands of people, Compaore initially rejected calls to resign.

He eventually withdrew plans for a vote on the constitutional changes but vowed to stay in power for another year, before announcing on Friday that he was stepping down.

Later the same day army chief Traore announced he was assuming power, after ordering the dissolution of the government and a dusk-to-dawn curfew.

But many protesters were deeply opposed to him taking power, seeing him as a close ally of Compaore.

"We do not want General Traore in power. We need someone credible. Traore is Blaise Compaore's henchman," said Monou Tapsoaba, an activist with the opposition People's Movement for Progress.

Zida appears to have more legitimacy with civil society. He appeared before large crowds alongside lawyer Guy Herve Kam, leader of the Citizen Broom group that helped lead the demonstration on Friday.

France's President Francois Hollande vowed that Paris will "contribute to calming" the situation in its former colony, while Washington urged "a transfer of power in accordance with the constitution".

The EU called for the people of Burkina Faso to have the final say in who rules their country.

Compaore was only 36 when he seized power in a 1987 coup in which his former friend Thomas Sankara was ousted and assassinated.

His bid to hold on to power particularly angered young people in a country where 60 percent of the population of almost 17 million is under 25.

Many have spent their entire lives under the leadership of one man and are disillusioned by the establishment in a country which is stagnating near the bottom of the UN human development index.

Known in colonial times as Upper Volta, the country won independence from France in 1960 and its name was changed to Burkina Faso ("the land of upright men") in 1984.