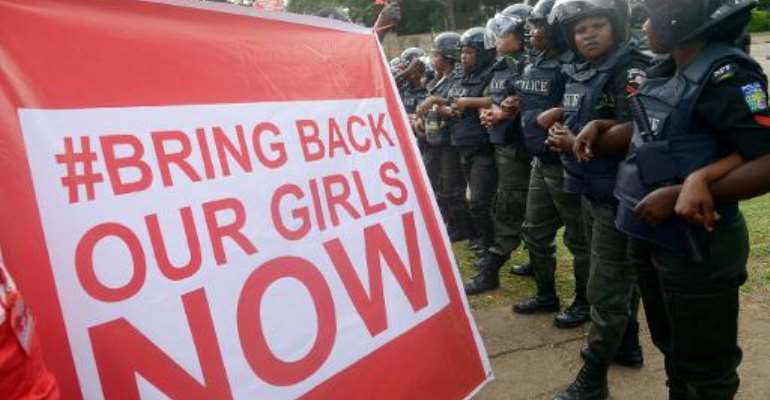 Supporters of the #BringBackOurGirls campaign demonstrate in Abuja on October 14, 2014. By Pius Utomi Ekpei (AFP)

Kano (Nigeria) (AFP) - Families of the 219 schoolgirls held for more than six months by Boko Haram militants on Saturday said they were shocked but not surprised at fresh claims that the teenagers had been married off.

Boko Haram leader Abubakar Shekau made the claim in a new video obtained by AFP on Friday, in which he also said that all the girls had converted to Islam and rejected claims of a ceasefire and peace talks.

The head of the Chibok Elders Forum in the northeast Nigerian town, Pogo Bitrus, told AFP: "It (the claim about marriage) is shocking to us, although we know that Boko Haram is not a reliable group.

"We were sceptical about the talks to release our girls and we never took the ceasefire seriously because since the announcement, they have never stopped attacking communities.

"Therefore the information that our girls have been married off is not surprising to us," said Bitrus, whose four nieces are among the hostages.

"We are only hoping the government will step up whatever efforts it is making to quell the insurgency."

Nigeria's military and presidency said on October 17 that they had reached a deal to end five years of deadly violence in the country's northeast, as well as agreement to release the Chibok girls.

But violence has continued unabated, including a triple bomb attack on a bus station in the northern city of Gombe on Friday, which killed at least eight and injured dozens more.

Shekau indicated in earlier video messages that the girls would be sold as slave brides and that some, but not all, had converted to Islam.

His latest claim that they were now all Muslims and had been "married off" chimes with testimony from former hostages that forced conversion and marriage are commonplace in Boko Haram camps.

Human Rights Watch said in a report published this week that upwards of 500 women and girls have been kidnapped since 2009, although some estimates put the figure at more than 1,000.

Enoch Mark, a Christian pastor in Chibok whose daughter and niece are among the hostages, said the girls' families were "lost for words".

"Since they were kidnapped we have no certainty about the situation they are in. We keep getting conflicting information," he added.

They were "ironically lucky" that world attention has focused on the Chibok girls, he added, but said their situation was part of a wider issue.

"Only God knows the number of girls kidnapped by Boko Haram," he said. "We only keep hoping that they will be returned to us and if they are not we take solace in God."