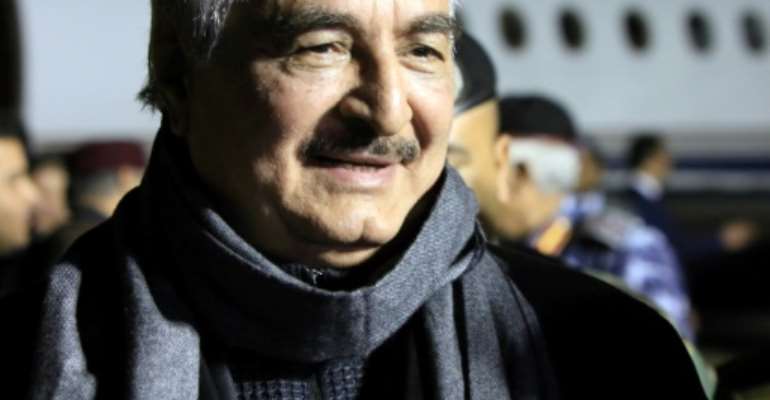 The deeply tribal nation has been sharply divided since the 2011 ouster of longtime dictator Moamer Kadhafi, with rival militias vying for influence and control of oil resources.

The power struggle pits an administration based in eastern Libya, backed by military strongman Khalifa Haftar, against a UN-brokered unity government in Tripoli supported by militias from the western city of Misrata.

"The situation is most likely going to escalate further given that the voices of war are now the loudest" after an air strike by Haftar's forces against the Misrata militias, analyst Mohamed Eljarh of the Atlantic Council said.

The Tripoli-based Government of National Accord (GNA) is the centrepiece of Western hopes to stem an upsurge of jihadism in Libya, but it has failed to assert its authority across the country. 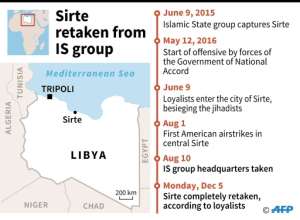 The rival authority in the east has refused to cede power and has its own armed forces, which call themselves the Libyan National Army (LNA) and are led by Haftar.

Pro-GNA fighters mainly from the Western town of Misrata drove IS from Sirte in December, capping a deadly months-long campaign for Kadhafi's hometown.

The Misrata militias include hardliners determined to fight Haftar's army.

The LNA has battled jihadists in second city Benghazi for more than two years and blames Misrata militias of backing diehard extremists.

On December 7, two days after Sirte's liberation, tensions flared when hardline Misrata militias joined an attack against Haftar's forces launched by an alliance of Islamist and tribal fighters.

Fears of IS regrouping

The assault on a town near Libya's "oil crescent" -- where Haftar had seized four export terminals from pro-GNA forces in September -- was launched from Al-Jufra air base in southern Libya. 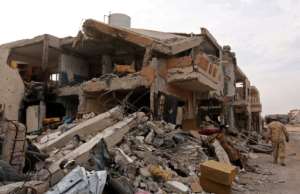 A member of the Libyan forces of the National Accord (GNA) patrols Sirte's Al-Giza Al-Bahriya district on December 20, 2016 after they drove the Islamic State (IS) group out of its Libyan stronghold earlier in the month

The LNA repelled it and since then has frequently bombarded the base, calling it a den of "terrorists".

On Monday, an LNA air strike hit a military plane carrying senior Misrata military and political figures who were flying out of Al-Jufra, killing one and wounding several.

The Misrata militias dispatched reinforcements to Al-Jufra as well as the Sebha region further west.

Martin Kobler, the UN special envoy to Libya, said he was "alarmed by the tensions in Libya's south" and urged all sides "to act with restraint and to resolve issues through peaceful dialogue".

US State Department spokesman John Kirby warned that further fighting could embolden the Islamic State group and other jihadists to reorganise.

"We note with deep concern... renewed fighting between Libyans... fighting which we believe will only benefit Daesh (IS) and other violent extremists there," he said.

"The truth is that to date, Libyan forces have made progress against Daesh in Sirte and in eastern Libya, and that's what makes this renewed fighting here of concern," Kirby added. 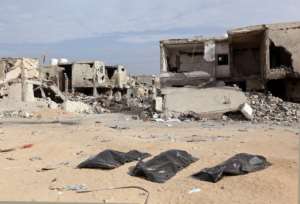 Body bags on the ground after being pulled from rubble by the Libyan Red Crescent in Sirte, on December 20, 2016

Despite the recapture of Sirte, which had been IS's main base in Libya, the jihadist threat persists in the country where experts say IS cells are present in several other areas including Tripoli.

Eljarh said a confrontation between Misrata and Haftar's forces could play out in Tripoli as well as the "oil crescent" and the southern region.

Such an outcome "will have a knock-on effect on Libya's oil and water facilities adding to the suffering of the entire population especially in western Libya and the capital," he added.

Eljarh said that the attack on the plane carrying Misrata dignitaries had inflamed even the most moderate factions in the western city.

"Hardliners ... have now managed to successfully switch public opinion within Misrata in their favour" and could now mobilise public support against the LNA, he added. 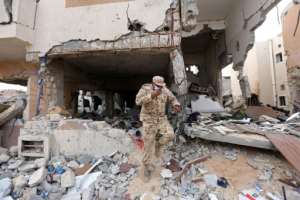 A member of the Libyan forces of the National Accord patrols Sirte's Al-Giza Al-Bahriya district on December 20, 2016

Mattia Toaldo, senior policy fellow at the European Council on Foreign Relations, said Haftar was trying to form alliances with Libya's powerful tribes to control the south of the country.

"The south is the most immediate flashpoint where Haftar is trying to replicate the strategy of tribal alliances and limited show of force that allowed him to capture the oil crescent in September," he said.

"Sirte is another flashpoint with Misratan fears that Haftar will use tribal allegiances to strip Misrata of its gains on the ground," he said.