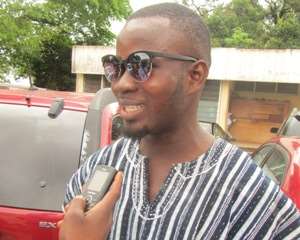 The Former student leader of the National Democratic Congress (NDC) who took the party to court recently, Njonolah Linus, has called on delegates to vote massively against all the current national and regional executives of the party for victory in 2016.

According to him, undemocratic tendencies and autocratic leadership

of the party at the regional and national levels, call for a rebranding of the NDC.

In an interaction with journalists in Kumasi, Njonolah Linus, who recently made headlines for placing an injunction on the party's congress and regional elections, said the 'intolerant leadership styles' had created disaffection and despondency among NDC sympathizers.

Several regional and national executive members of the party are seeking re-election, but the rule of law crusader believes they do not deserve second chance for their 'dictatorial behaviour' so that the fortunes of the party would not be affected in the upcoming general elections.

For him, only fresh hands could bring about the NDC rebranding project to make the party more attractive and appealing to all manner of people.

obvious choice for the marginalized in the society,' Linus charged and called on the party's delegates to heed to his advice.

On Monday, Linus accepted an offer from the NDC national executives

to end the legal tussle that was centred on overstay of leaders in office and new election guidelines that discriminate against some members of the party who want to contest for various positions at the regional level.

As part of the agreement, committees would be set up to oversee and supervise the conduct of the entire election process so that it would not be left in the hands of the national and the regional executive committee.

“I think it is not just my client who won. It is victory for the entire NDC,” lawyer for the NDC activist said.

The party has since decided to set up an independent body to oversee its upcoming elections.

Ghana Back To HIPC Not True – Oppong Nkrumah
3 minutes ago

Allowance For Workers Who Lost Job Due To Covid-19 — Mahama ...
15 minutes ago