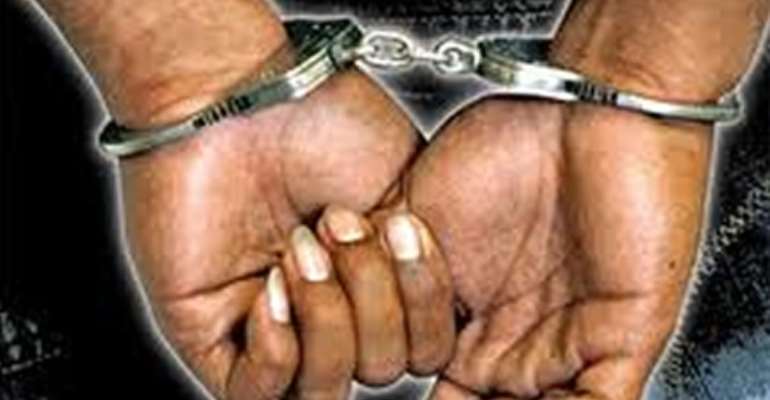 A former Accountant of Adom Limited, a construc­tion company in Sunyani in the Brong-Ahafo Region and the Manager of the Sunyani branch of Zenith Bank have been jailed by a Sunyani high court for stealing and money laun­dering involving GHâ‚µ 4,582,130 belonging to the construction company.

The suspects are John Cobbina, 32, the Account­ant, and Eugene Amoako, 38, the Branch Manager of the bank.

The money, according to police reports, were paid by clients into the compa­ny's account at the bank, but Cobbina, with the assis­tance of Eugene, diverted the money into his (Cobbina's) account without the knowledge of the compa­ny's management.

The two were sentenced to 25 and 15 years' impris­onment respectively when they appeared before the court, presided over by Jus­tice Larweh Buertey, last Tuesday.

Confirming the story to DAILY GUIDE, COP Pros­per Kwame Agblor, Direc­tor General of the Criminal Investigation Department of the Ghana Police Service, said that was one of the major breakthroughs the police had chalked in recent times.

Police said in 2012, they received a complaint from the Chief Executive Officer of J Adom Construction Company that the company had recorded some losses in its accounts. After a private auditor was employed to check the company's accounts, part of the report was handed over to the police for investigations.

Police investigations led to the arrest of John Cobbina, the company's Accountant, and Eugene Amoako, the Branch Man­ager of the bank, to assist in investigations.

During police investiga­tions, it was discovered that John Cobbina had used the money they dubiously diverted into his account to acquire various properties at Techiman and Sunyani.

Some of the properties acquired included 10 build­ings—seven in Sunyani and three in Techiman.

Out of the 10 houses three of them are located at Hansua, Techiman, and two also at Berlin Top, Sunyani, fully furnished.

Cobbina also used some of the .money to purchase a Mercedes Benz with regis­tration number GW 2282 W, a Hyundai Santa Fe with registration number AS 1642-12, and an unregis­tered Toyota Matrix Saloon car.

The suspect also acquired a cosmetics shop and an artificial hair shop for his wife, together with a hardware shop - both at Fiapre, Sunyani.

Investigations revealed that Cobbina established a company and registered it in his name as Cobivert Ghana, which deals in civil engineering import and export; undertakes road construction and general merchandise, trading and distribution – just to divert the attention of his employers.

Upon the advice of the Attorney General, the two were charged with the offence of money laundering and stealing conspiracy, among others before the high court.

The properties acquired by Cobbina were ordered by the court to be auctioned to defray the amount stolen from his former company.

COP Agblor commended the Sunyani Regional Commander and his team or the thorough investigations conducted into the case.